Three Lower Mainland sewage treatment plants have dumped billions of litres of toxic waste into the Fraser River, Burrard Inlet and the Strait of Georgia, breaking federal environmental law for years without penalty.

The three wastewater plants are Iona Island in Richmond, Lions Gate in North Vancouver and Annacis Island in Delta. They have failed dozens of basic monthly toxicity tests that measure how harmful wastewater is to fish and marine life.

In 2006, the most recent year for which numbers are available, all three plants each failed the test six times. These plants have been consistently failing toxicity tests for the last seven years.

The federal Fisheries Act prohibits the dumping of any potentially harmful substance into fish-bearing waters. Courts have traditionally used toxicity tests as a way to decide whether municipal sewage is considered harmful. Environment Canada issued an official warning against the region under the Fisheries Act in March 2001, but no further action was taken.

Metro Vancouver officials admit the plants have repeatedly failed the tests. But they argue these results are misleading, because their monitoring programs show that the wastewater does not harm marine life. 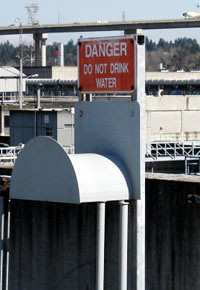 “We have a very comprehensive program to show that when we discharge to the environment, the environment is not being adversely affected,” said Albert Van Roodselaar, manager of the Utility Analysis and Environmental Management Division at Metro Vancouver. “We do not believe we are being deleterious to the environment.”

“Fish aren’t floating to the surface and dying,” said Christianne Wilhelmson of the Georgia Strait Alliance, a B.C. based environmental group. “But every day you’re putting mercury and arsenic and a long list of chemicals into the ocean. And over time, that is contaminating the ecosystem.”

The test was originally devised by Environment Canada in 1990, and performed by an outside lab on behalf of the region. It involves taking a water sample from treated wastewater just before it is dumped into a nearby river or the ocean. Rainbow trout are placed in the sampled water for 96 hours. If at the end of this period, more than half of the fish die, the test is considered a failure.

Metro Vancouver has to perform the test and report results to the provincial government. But it decides what to do about poor results.

The federal government has enforced the Fisheries Act against municipalities in the past. In 2003, Dawson City in the Yukon was convicted for dumping its sewage into the Yukon River after minimal treatment. Like Metro Vancouver, it repeatedly failed toxicity tests, and also like Vancouver, there was little observed damage to the environment due to the sewage. A judge decided that the toxicity test failures were enough to convict.

Dawson City was fined $5,000 and ordered to complete construction of a secondary sewage plant by September 2004. It was also ordered to pay an extra $5,000 for each month that it failed to meet this timeline.

Environment Canada has been working with the provincial governments since 2003 to create national quality standards for municipal wastewater. These standards will likely be announced later this year. It is still unclear whether the new standards will be enforced by the federal government or left to the provinces.

Metro Vancouver is also planning improvements to treatment quality. The region developed a Liquid Waste Management Plan in 2002, despite the federal government warning that the plan was insufficient to deal with the region’s obligations under the Fisheries Act.

This plan requires the region to improve the Iona Island plant by 2020 and the Lions Gate plant by 2030. Some environmentalists say that the region should not wait so long, but regional officials believe that it takes roughly 10 years to plan and construct such comprehensive plant upgrades.

Map: Find out the locations of Metro Vancouver’s sewage treatment plants and beaches

Q&A: Making more out of sewage

Sewage treatment is the million-dollar question for Vancouver’s municipal politicians and environmentalists. One approach already in use in the False…

Curtis Ballard rushed to fasten plywood between parking curbs as rain cascaded down Wesbrook Mall. The water runoff streamed toward…

New research shows that fish play an important role in the fight against climate change. Research published in the January…

Innovative food start-ups in B.C. are pioneering a new technique in which fish and plants help each other thrive. Aquaponics…