After a wave of sexual assault allegations posted on social media and the death of a local DJ last month, members of Vancouver’s music scene are calling for community standards for venues and more resources to respond to callouts.

One possible solution could be to establish an organization responsible for dealing with accusations and holding venues accountable for promoting safe spaces, she said.

Carrico said the organization should be an autonomous body of people not affiliated with any specific venue.

“My fantasy outcome is basically that we develop a community standard, not just for Red Gate but other venues … of what we will tolerate, as well as some sort of accountability process.”

Carrico said the onus is on venues to ensure everyone who participates in the music scene is safe.

“The last few months have made it abundantly clear that it’s not just our venue, it’s the rest of the community,” she said. “We all need to be working on this.”

On Oct. 14, a list of seven names of well-known Vancouver DJs and promoters alleged to have committed sexual assault was posted on Facebook. One of them, Zachary Webb, was found dead by suicide three days later though it is still unclear if he knew of the post when he died.

Vancouver artist and editor of Discorder magazine Brit Bachmann agrees that Vancouver’s club community needs a way to take action after callouts. She says people seem to think when men are called out on social media, they will simply  disappear. “But that’s just not realistic.”

Bachmann says there is already some good work being done at street level to promote safe venues, but more is needed.

The people now putting time and effort into dealing with these issues have been on board for a long time, Bachmann said.

“Moving forward, I think it would be good for some other organizations to pop up around this topic in regards to what happens after the callout.”

Vancouver currently already has at least one group educating venues and operators about sexual assault in the city’s music scene. Good Night Out Vancouver provides harm-reduction workshops to venues and operates the Nightlife Street Team, volunteers who patrol the Granville strip on weekends to support vulnerable partygoers.

“We did a fully public workshop on Nov. 2 at the Vogue [Theatre], which was totally different for us,” Forrester said. “And that was initiated by the folks at Fortune Sound Club.”

Forrester said over 75 people attended and workshop requests have increased by “300 per cent” since last month. Forrester hopes community members who don’t always focus on social justice will now take the issue seriously.

“When you’re part of a scene, you’re kind of in a bubble and able to pretend that sexual harassment and sexual assault doesn’t happen in your scene, which is a very dangerous and slippery slope to sit on,” she said. “The fact that the mainstream Granville strip is reaching out, that means it’s reached peak ‘a day of reckoning’.”

Good Night Out will also partner with Vancouver Art and Leisure and local performance artist Dorothy Joyce to host a symposium and “feminist dance party” on Nov. 25 called Intersect.  The event will feature a panel discussion, music, art installations and local DJs.

“The only way that sexual assault and rape culture is going to be addressed in Vancouver is with a community effort,” she said. 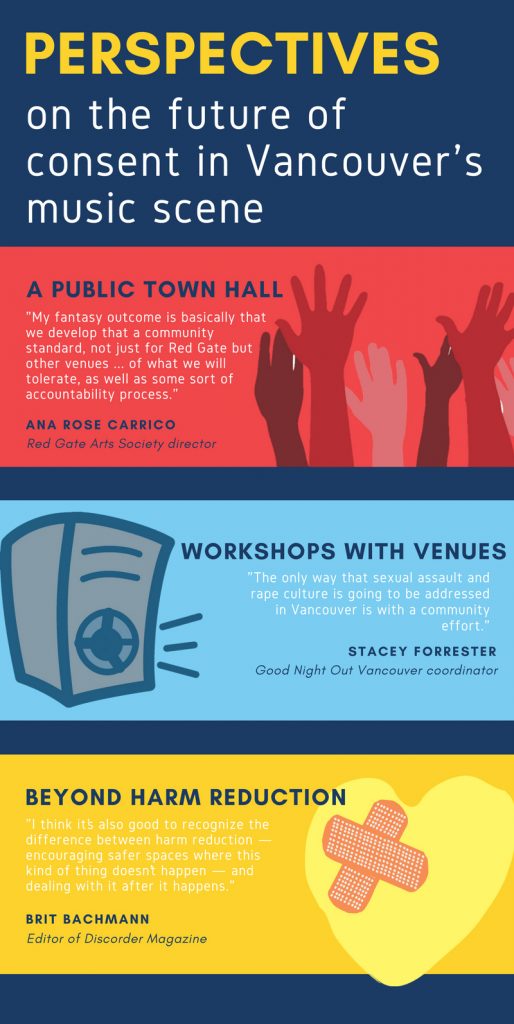 But Bachmann says creating safe spaces is not enough. Fallout from online callouts also needs to be addressed.

“Organizations like … Good Night Out deal with harm reduction and they’ve taken a really strong leadership role in talking about issues of gender-based violence,” she said.

“But I think it’s also good to recognize the difference between harm reduction — encouraging safer spaces where this kind of thing doesn’t happen — and dealing with it after it happens.”

“It’s never been this overt. We’ve never had a list of names before,” she said. “In the past basically the only tools we’ve used as a community has been calling out .. and ostracism. But it’s become clear that those are not good enough tools for the community to move forward.”

Anxious times for rising numbers of BC temporary workers

[blip.tv ?posts_id=2968776&dest=-1] For the past six months, Mehernosh Panthaki has been earning 40 per cent less than his fellow construction…

Afghan Canadian diaspora refuses to forget those in Taliban Afghanistan

The economic collapse has far-reaching consequences that span beyond the borders of Afghanistan and the resources in Canada aren’t enough, Afghan-Canadians say.