The Carrall Street Greenway Project is a City of Vancouver initiative that will link False Creek and the Burrard Inlet by renovating and “greening” a six-block stretch along Carrall Street. 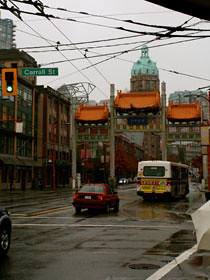 The Greenway will complete the Seawall circuit around downtown and Stanley Park and will be connected to the city’s other greenways. According to planners, the project is, “a major community building and economic revitalization initiative.”

Michel Desrochers, the city planner in charge of the renovation of Pigeon Park, says that the Greenway is unique from others in North America because, “It will cut across many diverse neighbourhoods. Gastown, the Downtown Eastside and Chinatown are very different places and the new linkages should benefit each area.”

Green elements of the plan include an increase of trees and shrubs and a landscaping design that will absorb rainwater to help sustain the new plants.

According to Linda Chow, the Carrall Street Greenway project manager, the Greenway is designed to “give a higher priority to pedestrians and cyclists.” A recreational path will be added along both sides of the route with wider sidewalks for pedestrians and narrowed roads to slow traffic.

The Greenway will include elements of CPTED (Crime Prevention Through Environmental Design). Chow explains, “We will be adding additional street lights and pedestrian level lighting, making it brighter and more comfortable for people walking.” 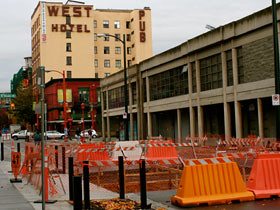 Moreover, Chow hopes that the renovations will increase civilian traffic and deter crime by providing, “more eyes on the street.”

With one block of the Greenway already completed between Pender and Keefer street, Chow says that the project has received positive reviews from the Chinatown community.

“They like how it looks and are happy to see cyclists using the recreational pathways.”

Relying on both public and private investment, the project has received five million dollars from the city of Vancouver, as well as three hundred thousand dollars from the Vancouver Agreement Partners and Bell Canada.

As Vancouver announces plans to extend laneway housing to the West End, some say the small homes aren’t the affordable…

Seniors are the fastest growing group of homeless people in Vancouver, but shelters can be a risky option for them. They…

In a city with the most visible East Asian population in Canada, there is one type of Asian who remains…