The City of Vancouver estimates that there are 1,400 homeless people sleeping in city streets each night. These numbers may increase as a historic Gastown hotel is about to join the growing list of Single Room Occupancy (SRO) buildings whose low-income tenants have been evicted in recent months.

“The ownership just changed hands and all of a sudden I’ve got this eviction notice, it was a big surprise,” said Brian, a 60 year old construction worker and five-year resident of the Dominion. 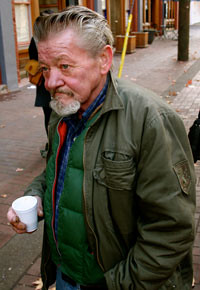 The eviction orders were issued under the authority of the Residential Tenancy Act, which allows landlords to evict tenants in order to renovate units as long as the proper permits are obtained from the city.

The tenants who received the notices have been ordered to vacate their homes by New Year’s Eve.

Residents are fighting the eviction with assistance from the Downtown Eastside Residents Association (DERA). They are challenging the notices at the Residential Tenancy Branch and held a demonstration at the Dominion on November 24.

Anna Hunter, a social housing advocate with DERA, argues that while evictions for the purpose of renovations are legal under the Residential Tenancy Act, the owner did not have the necessary permits when he issued the eviction notice.

“He only obtained the proper permits on November 6, which means that he issued an illegal eviction notice on October 31st,” said Hunter.

“The building is almost one hundred years old,” he said. “I promise you that these renovations are not cosmetic, the building is a hazard right now and the evictions are absolutely necessary.”

Cohen explained that Water Street Projects is taking steps to ensure the residents’ relocation goes as smoothly as possible.

“We are giving them their security deposits back, paying their moving expenses and letting them keep the furniture in their rooms,” he said.

Cohen also expressed disdain for some housing advocates who he said were “more concerned with themselves than with the residents.”

[bliptv Ubcjournalism-DominionDemonstration505] Wendy Peterson of the Carnegie Centre speaks to a demonstation at the Dominion Hotel at the corner of Abbot and Cordova.

Hunter views the eviction of low-income renters from the Dominion Hotel as part of a wider trend.

“What we’ve seen in the last six months is a process of slow conversion. A tenant will be evicted or will leave and the landlord will do a few repairs, then double or triple the rent so that building is no longer accessible to low-income renters.”

Indeed, several SRO buildings in Vancouver have been converted into boutique hotels in recent months, including the 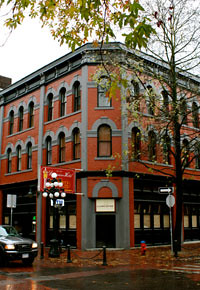 American Hotel and the Pender Hotel.

Many housing advocates have stressed the need to build more low-income housing in addition to protecting what currently exists.

The municipal and provincial governments, along with the Vancouver Organizing Committee (VANOC), initiated the Inner City Inclusive Committee Study in order to evaluate the state of social housing in Vancouver.

The study has recommended that 3,200 units of low-income housing be created in order to prevent a homelessness crisis during the 2010 Olympic Winter games.

David Chudnovsky, MLA for Vancouver-Kensington and Opposition Critic for Homelessness and Mental Health said, “The government needs to get serious and make sure that these units are built.”

Although advocates have accused the government of inaction, ten hotels were purchased by the province last April, providing an additional 600 units of low-income housing.

Of these new units, 470 will be managed by Atira Women’s Resource Society. Janice Abbott, Atira’s director, is cautiously supportive of the province’s performance.

“I think that they’ve done a good job and they could probably do a better job, but they’ve certainly made enormous strides in the last six months.”

Sam Rainboth, manager of public affairs for BC Housing, believes that construction can begin by the end of next year: “The province hopes that these units can be up and running soon with the cooperation of the city and non-profit housing providers” 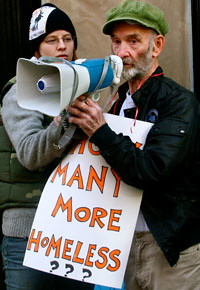 While officials, politicians and activists argue about the overall performance of BC’s efforts to stem homelessness, fifteen people anxiously await their fate.

Housing advocates stress that while they are using legal channels to prevent the evictions at the Dominion, they will not rule out the possibility of radical direct action should the legal efforts fail.

Kim Kerr, the director of DERA and an associate of the Anti-Poverty Committee, explained the gravity with which he views the situation.

“These evictions are essentially death sentences,” he said. “We have women and elderly people living in that hotel and many of them have compromised immune systems. It’s a life and death matter when people are forced out onto the streets of the Downtown Eastside.”

He went on to state, “We will take over and occupy the hotel if that’s what’s necessary.”

Related: Homeless advocates speak out against 2010

BC Housing and the City of Vancouver are listening to ex-residents and advocates of Little Mountain housing site, but for…

Local TV show The Magicians goes green behind the scenes

The crew slashed waste and emissions, but still struggled to get off diesel

UBC home to unique blood-donation clinic for those banned elsewhere

NetCAD offers those who are ineligible a chance to give blood — not for transfusion, but for research

Vancouver has one of the largest car-sharing markets in Canada

The café offers an original member-led recovery community that focuses on more than just alcohol and substance addiction.