Moving to a new city can be a lonely experience.

But volunteers for the Vancouver branch of an international Facebook-based initiative called GirlCrew dedicate time every day to help women connect with each other.

“As you get older, it’s harder to turn to someone and go, ‘Will you be my friend?’” says Brid Dunne, a recent immigrant to the city from Ireland who is one of the four volunteers for the Vancouver chapter.

GirlCrew was created three years ago in Ireland, when founder Elva Carri was looking for a group to go dancing with. She put a call out for platonic dance buddies on Tinder and received more than 100 enthusiastic matches. Carri added everyone to a Facebook group and, from that, GirlCrew was born.

The Vancouver chapter, one of 46 around the world, has attracted a lot of newcomers in the city.

Dunne joined the GirlCrew Vancouver Facebook page about three months before her move to the city after being a part of its original group in Dublin.

“I would not have moved to Vancouver if I didn’t know GirlCrew existed,” said Dunne, who makes her living working as HR manager for a Canadian travel agency.

When she arrived in Vancouver, the group only had a few hundred members. In the year since her arrival, membership has risen to over 2,300 women.

“I will get up to 20 member requests a day, and it’s not just approval,” Dunne explained. “We want it to always be a safe space, so we have to confirm that they’re female and we need to look out for any bots.”

In other cities, GirlCrew groups typically only accept people aged 25 and older. But GirlCrew Vancouver accepts members from the age of 19, as Dunne says there are lots of younger women on their own in the city looking for connections.

Dunne admits to spending an average of eight to 10 hours a week on the page accepting members requests and going through individual posts to make sure people aren’t being disrespectful to other members or leaving anyone behind at events.

“We want to make sure that every person feels supported in the group,” Dunne said.

Dunne hosts “Newbie Nights” at the Black Lounge on Abbott Street every two months to welcome new members. The next one will take place in mid-December.

The importance of human connection

Members say GirlCrew Vancouver has helped get rid of the awkward barriers when trying to make friends in the city.

“It’s nice to know you’re not the only one who comes here without knowing anyone and wanting to connect with other people,” said Rachelle Smalldon. “You don’t have to feel awkward about reaching out to people or that you’re the only one doing it because everyone’s doing it.”

Smalldon is a leadership coach for Steer Empowerment, working as a creative support system for inspiring leaders and social impact organizations. She studies people’s personalities and communication styles to show the positive impact those differences can bring to a team, like the kind that GirlCrew fosters.

“It’s just good for people’s well-being,” Smalldon said. “Having people who you feel comfortable around and who support you and where you can share your good things and concerns and your weaknesses or insecurities with people is a good way to learn more about yourself.”

Julia Sheehan said she was also able to find instant connections with other women in the group when she arrived in Vancouver from Sydney, Australia.

“I think GirlCrew is a wonderful idea when one comes to a city alone,” she said. “It made me feel more comfortable and settled knowing that I have a support group of ladies to have fun with as well as support each other.”

According to Dunne, GirlCrew currently connects over 100,000 women. GirlCrew also operates topic-specific groups, including a page dedicated to travelling so women can connect with each other wherever they travel. 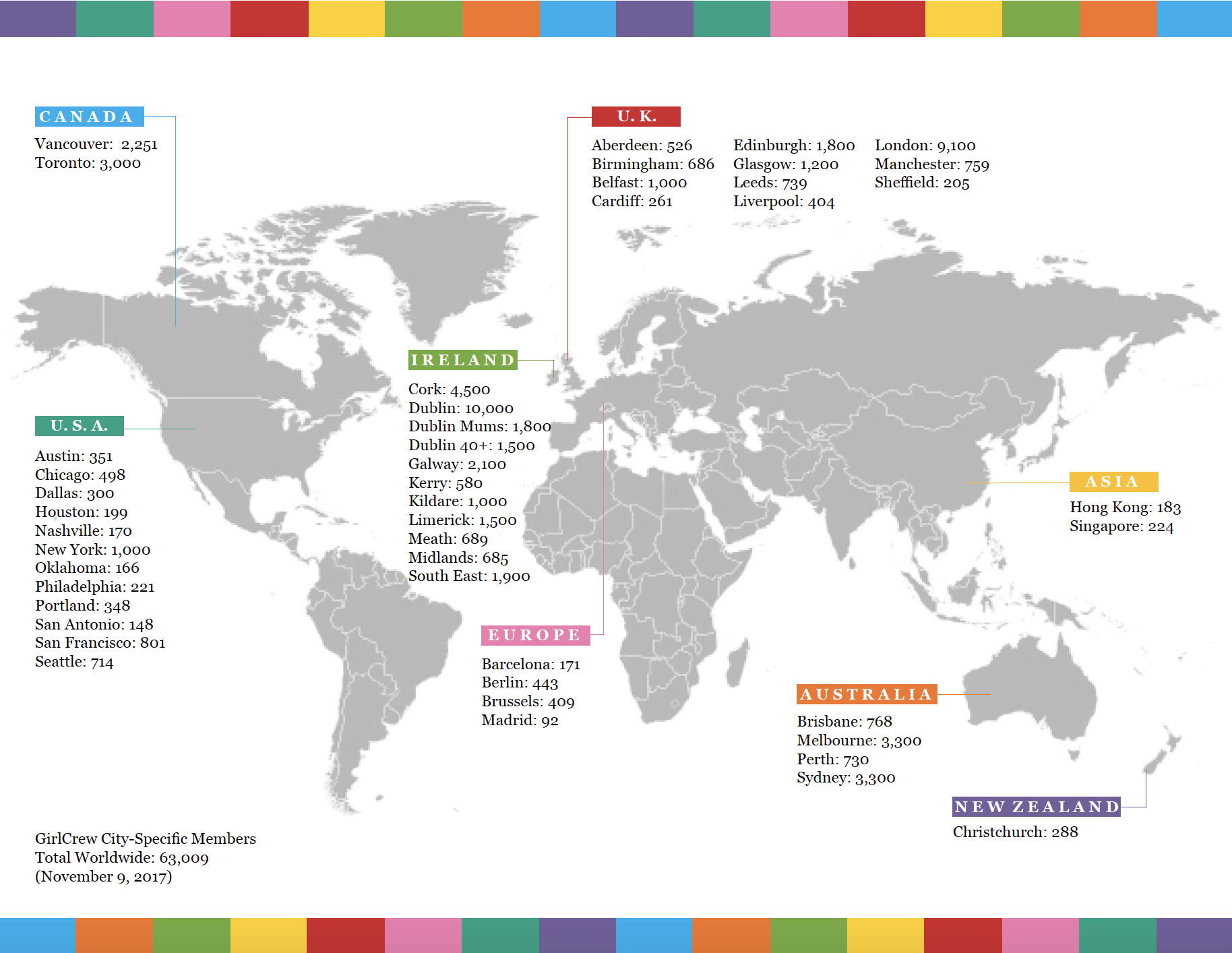 Recent posts on the travel group page include a woman who was able to meet up with other GirlCrew members travelling through Asia while on her solo trip in the summer, and another who contacted 29 other women to meet up with her for a Christmas market in Belfast so she wouldn’t have to go alone.

Dr. Erin King-Brown, a psychologist at University of British Columbia Counselling Services, says there is substantial research that shows the correlation between human connection and improved physical and psychological well-being.

“In terms of groups, it creates this avenue for connection,” King-Brown says in relation to groups like GirlCrew. “They can be helpful not only to know you’re part of something and you belong to something, but also the accessibility of meeting up.”

Loneliness is a topical issue for psychologists, and King-Brown encourages face-to-face connection when reaching out to others. But since everyone experiences their felt sense of connection subjectively, she also suggests being open to different avenues of connection such as volunteering, participating in part-time work, or study groups for those who aren’t too keen on meet-up groups.

“If you look at mental health and depression specifically, a lot of the time it can really impact that sense of purpose,” King-Brown says. “When you can get involved in something that provides that purpose, it can be super helpful.”

UBC students excited to return to campus, worried about what they might lose

With UBC returning to campus in the fall, students wonder if the benefits of online classes will be lost.