Mikayla Ogrodniczuk never wants to lose another teammate to suicide. The 21-year-old hopes that a new mental-health initiative called the UBC Athletes Hub will help her deliver on that goal.

In 2016, Mikayla and players on the University of British Columbia women’s hockey team were shocked by the sudden death of their teammate. Suicide was not something anyone was talking about, let alone anticipating. The devastating loss pushed Ogrodniczuk to look for answers.

“My team lost Laura Taylor after my first year to suicide, so that really started the search for different resources that were available just to see what was out there,” she said. “We realized there wasn’t a lot out there — her memory really drove it.”

Ogrodniczuk knew she needed an expert’s help, which is why she reached for her dad.

John Ogrodniczuk is a UBC professor and the director of the UBC psychotherapy program. He said that, following the death of Mikayla’s teammate, he knew it was the right time to build the resource.

“Mikayla has the kind of personality in which people approach her about this. With Laura’s death, she did have a lot of people come forward to her, and she was surprised because there was no indication from these people previously that they were having struggles,” said Ogrodniczuk.

“Taking that experience of Laura’s death, people coming forward, how our family is, and knowing what I do, we thought it was a perfect opportunity to do something.”

Behind a unique mental-health resource

The Ogrodniczuks had to start from scratch as there were no other resources in Canada specific to student athletes. So, they decided to create a website called the UBC Athletes Hub in December 2017, the first university-based digital platform in Canada focusing on providing mental-health resources for student athletes.

The website has numerous Vancouver-based resources. It also includes research studies on mental health and personal stories about athletes’ struggles with depression and anxiety.

That’s why Olympian and former varsity swimmer Erika Seltenreich-Hodgson turned to a UBC sports psychologist, a resource she found through the hub.

“I almost choked before I dove into the pool before my races,” said the Pan-American bronze medalist.

It wasn’t until she started to discuss her challenges that she realized she wasn’t alone.

“I finally had a more open conversation with my sports psychologist. It was an eye-opening thing. I was exhibiting these symptoms but, at the same time, I didn’t think there was anything wrong with me.”

According to a National College Health Assessment survey in 2016, one in five Canadian students is depressed, anxious, or battling other mental-health issues. Thirteen per cent have also indicated seriously contemplating suicide.

In the sporting world, athletes have expressed an unwillingness to discuss any symptoms that may put them in a position of perceived weakness. They are trained to be focused, disciplined and strong.

Measuring the success of the UBC Athletes Hub in its first year has been difficult. However, the Ogrodniczuks have leaned on the site’s traffic reports to gauge their reach and influence.

“We are getting approximately 100 visits per month, not a huge number, but given that there has been zero budget, that is really organic traffic,” said John Ogrodniczuk.

The hub has already grown beyond Vancouver. A recent partnership with the UBC campus in Kelowna is an important step to increase the website’s scope.

Now, students are starting to talk.

“It’s becoming a very talked-about issue, especially amongst athletes and especially in swimmers,” said Megan Dalke, a member of the varsity swimming team at UBC. “It’s just like a normal thing, it’s just like going to the doctor with our team.”

Normalizing mental-health issues is the very goal Mikayla had in mind when creating the hub a year ago.

“If you see someone struggling, you can bring it up in a way that there are things available,” she said.

The hub now needs funding and staff to expand.

“Realistically, without a budget, it is what it is. It costs money, so we were in the fortunate position to be able to help Mikayla bring this to life,” said John Ogrodniczuk. “But you need someone with the technical skills and expertise to keep a website going. We had zero budget to do it, so we had to just do it on our own time.”

Now they hope the hub becomes part of the UBC athletic department’s offerings to all students enrolled in their programs.

“[The athletic department] obviously has demands on their budget as well so it’s not so easy for them to say, ‘Hey, we can take over and make it right,’” said the professor.

UBC invested $2.5 million into mental-health services on campus; however, no funds were specifically designated for the UBC Athletes Hub.

The hub’s modest success has led John Ogrodniczuk to envision it expanding across the country.

“The website is not doing bad by just being there. So, if there was some budget and engagement, I think it would really help,” he said. It could become a resource for the organization that governs all post-secondary sports in Canada, USport.

The hub has changed the conversation, but the inclusion of male athletes is still lacking.

“I still don’t think we are there yet, especially in male-dominated sports. In our initiative, we only have two guys,” said Arielle Sadaka, the UBC co-lead of a separate student-athlete mental-health initiative being conducted on campuses across Canada.

John Ogrodniczuk, who also leads HeadsUpGuys, an initiative to combat depression in men, sees the inclusion of male athletes as the toughest task for the hub to address.

“There is then a double expectation to not talk about it, not show vulnerability, and you just have to soldier on,” he said. “If you are talking about male athletes, it is a compounded barrier for them — they are men and an athlete.”

Both Mikayla and her dad believe eventually student athletes will become comfortable with the mental health conversation.

“Our team is very accepting and we are trying to expand that to the greater athlete population so that they know that and know that it is okay.” 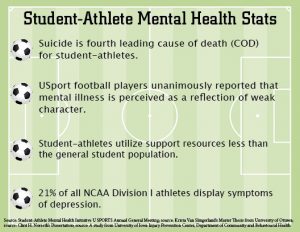 The proposal process for new casino

Before Paragon Gaming’s casino deal with the province was inked, BC Pavilion Corporation (PavCo) sought approval from city council in…

Indian women push to detangle stereotypes about hair and identity

Indian society has always nurtured a blinkered point of view when it comes to the dynamics of a woman’s hair, mainly typecasting it as a symbol of femininity and grace.

Alyssa Kohlman has a lot invested in her scrambled egg breakfast. She spent roughly $1,000 to bring two hens from…

UBC expanding smoke- and vape-free areas, but no outright ban

Area around hospital now smoke-free with more restrictions to come

Winter homeless shelters are not the solution for one group

The city of Vancouver opened four temporary homeless shelters this week as winter weather sets in. But Shawn Smith, a homeless…