The future of “binning” in the downtown core is in doubt after Vancouver City Council approved a new bylaw to remove dumpsters.

More than 1,500 binners in Vancouver collect and recycle cans and bottles that have been thrown out. They help make British Columbia the second-best recoverer of recyclable beverage containers in Canada, after Nova Scotia. 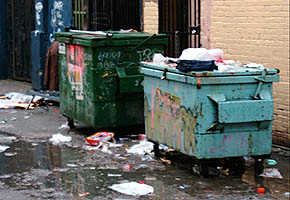 The new bylaw, which was approved on Nov. 29, involves the removal of more than 450 dumpsters and replacing them with colour-coded garbage bags, which will be picked up a few times a day by private recycling companies and according to city council, binners as
well.

It is intended to reduce crime, clean up the alleyways and make them more accessible to the public after years of complaints from businesses. But some worry that it may have unintended consequences.

“If we don’t have access to these bins, I can see some people turning to more desperate means to make money,” said Daniel Lee, a local binner. “People could turn to crime in order to survive.”

City councillor Kim Capri supports the removal of the dumpsters, but is also sympathetic to binners’ concerns. “We want social oversight on this issue. This isn’t about excluding [binners], it’s about working with them.”

Business representatives believe that the new bylaw will allow them to develop working relationships with binners. They envision scheduled pickups by the binners of the bags that contain valuable cans and bottles. The city is waiting for a formal plan from three downtown Business Improvement Areas (BIAs) before launching the program in 2008.

Ken Lyotier, a former binner who now operates the popular Downtown Eastside bottle recycling depot United We Can, said that he is optimistic the binners will survive despite the loss of dumpsters. He is cautious, however, about assuming that a business relationship between the BIAs and the binners will work.

“There are many, many people that are engaged in the binning activity in Downtown Vancouver that aren’t going to be able to easily step up to the plate of a structured, more traditional work situation,” said Lyotier.

Yaletown BIA executive director Annette O’Shea said owners have been lobbying for years to make alleyways safer, reporting that more than two-thirds of the assaults in Yaletown this year happened within a few metres of a dumpster.

Along with reducing crime, BIAs hope removing dumpsters will make the alleyways cleaner, more accessible and able to be used for patios or alternative entrances.

Ralph McCrae, spokesperson for the Independent Waste Haulers Association (IWHA), said that linking dumpsters to crime is inaccurate. “Crime in alleys is a symptom of the location, not the equipment that’s in it,” he said. “That’s like saying a high percentage of crime occurs within a certain number of feet from a telephone pole.”

Similar bylaws have recently been enacted in Kelowna and Seattle. Toronto has a voluntary trash separation system. The results in these cities have been generally positive, according to supporters of the bylaw. Lyotier isn’t ready to say that means it will work in Vancouver. 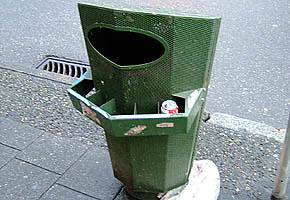 “Because of the lack of the deposit refund system [in Seattle] and because Kelowna is a much smaller city
with a lot fewer people engaged in the kind of activities
we have in Downtown Vancouver, I don’t think you can
compare them,” said Lyotier.

McCrae echoed Lyotier’s comments, saying the result
of Seattle’s lack of a deposit refund is that the city
doesn’t have a significant community of binners. There
are also very few binners in Toronto, even though it does
have a deposit refund system. The system there only applies to alcoholic beverage containers – and they are rarely thrown out.

Differences between these cities and Vancouver make it difficult to predict the future for binners, but Lyotier said he still thinks the bylaw can work. “But only if it’s done right.”

Pandemic has B.C. parents struggling to save for children’s higher education

A walk through a Downtown East Side neighbourhood is a difficult experience to forget. The eclectic group of characters that…

After a lifetime of hard work in rural Alberta, Clem has traded in his Prairie existence for a fresh start…