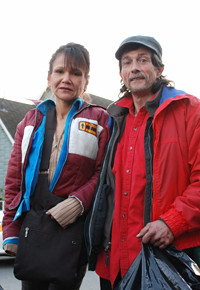 Sylvain Gagnon, 48, is one of over 2,000 homeless people in Vancouver competing for approximately 750 shelter beds.

On this day he was collecting food from Quest Food Exchange with his partner Jacqueline Cross, 41.

They are a couple, he said, and have experienced the affects of city by-laws first hand.

“I’ve been taken to Jail, I’ve been handcuffed,” he recollected. “I never really fight about it, I am just one guy you know.”

Gagnon and Cross are living in a warehouse in East Vancouver. They have two garbage bags and a shopping cart of belongings between the two of them. Gagnon is pragmatic about his situation and says that part of the reason he is on the street is addiction.

“I find things that I can sell,” he said, “I choose to do that instead of stealing.” He also survives by collecting cans and bottles.

Despite circumstances, Gagnon has a resilient and jovial spirit. He and Cross shared banter as partners often do as he told his story.

Homelessness is especially difficult on couples, he said, because it is often hard for them to find space where they can be together.

“I don’t think its fair,” Gagnon recalled, about the time he was arrested and jailed after being found sleeping in a park.

“All I did was sleep,” he said. “Everyday I fear that the cops will show up and move me again.”

As winter approaches, Gagnon and Cross have found a temporary solution, a warehouse with an owner willing to let them stay provided they don’t make a mess.

“Thank God [for] the place we found,” he said, “they can’t do nothing about it because the owners says it is okay. That’s one step ahead that we have. So I am pretty grateful for that.”

A history of compromising photos

Vancouver’s second supervised injection site, which has operated illegally for 13 years, may be getting its official permission to operate…