The popularity of cremation is shown here in Mountain View Cemetery in Vancouver.

Despite its popularity across Canada, a method of body disposal that has zero air emissions is yet to be legalized in British Columbia.

Aquamation, also called bio-cremation or alkaline hydrolysis, is the process of dissolving a body using alkali. Its carbon footprint is almost seven times less than that of cremation. 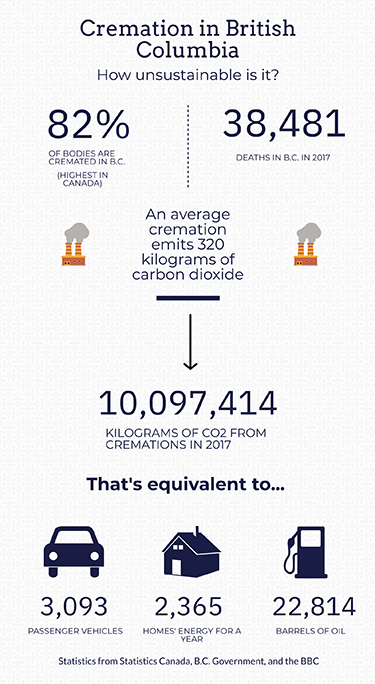 According to Statistics Canada and the B.C. government, cremation released over 10 million kilograms of carbon dioxide in the province in 2017.

Eighty-four per cent of B.C. residents believe climate change represents a major threat to the future, and yet the issue of cremation emissions has not been a priority in the British Columbia legislature.

Aquamation is now legal in Saskatchewan, Ontario, and Quebec. Chris Benesch, owner of Earth’s Option green burial in Victoria, has been advocating for over two years to legalize it in B.C.

But his efforts have been met with setbacks from legislators, who have not responded to his multiple calls and letters.

“I quite honestly underestimated the complexity of getting it [legalized]. The province is just not interested as much,” Benesch said.

David Karn, press officer for the B.C. Ministry of Environment and Climate Change Strategy, pointed to the province’s carbon-tax laws as proof it is fighting emissions from cremation.

Aquamation has proven to be a popular choice in the provinces where it’s legal, which may point to a trend both the funeral industry and the government may eventually heed. 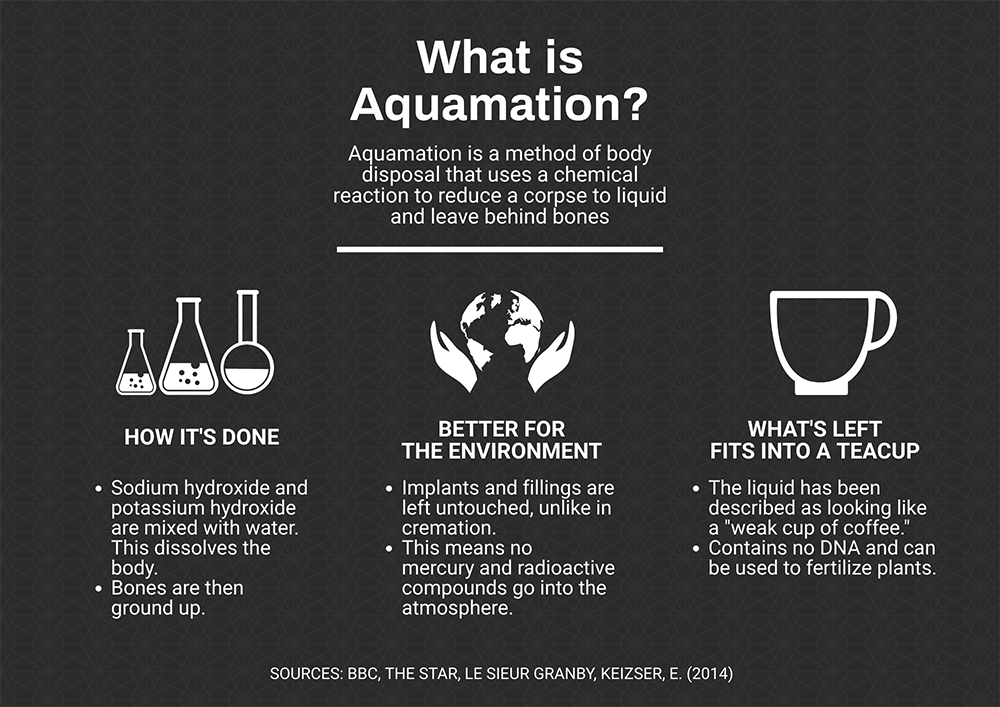 The first man to offer aquamation in Canada was Drew Gray, who runs a funeral home in Saskatchewan. He says he offers it at the same price as cremation, and aquamation is still preferred by the majority of his customers.

“We didn’t want to artificially create an incentive for people to choose it. And still nine out of 10 families choose it on their own,” said Gray.

This level of popularity was corroborated by funeral directors in Ontario and Quebec. Derek Tremblay in Quebec admitted it was tough going initially.

The recent popularity of the process, and the environmental impact, however, may eventually force the industry’s hand.

“If it was legalized [in B.C.], it would be the end of flame-based cremation. What do we incinerate anymore? This is the last vestige of an old-fashioned industry,” said Gray.

Benesch’s campaign to legalize aquamation is still ongoing and he remains hopeful the province may eventually legislate the issue. He has now written to the B.C. Chamber of Commerce and the Canadian Federation of Independent Business, as well as the B.C.’s environment ministry.

Winter homeless shelters are not the solution for one group

The city of Vancouver opened four temporary homeless shelters this week as winter weather sets in. But Shawn Smith, a homeless…

Afghan Canadian diaspora refuses to forget those in Taliban Afghanistan

The economic collapse has far-reaching consequences that span beyond the borders of Afghanistan and the resources in Canada aren’t enough, Afghan-Canadians say.