Vancouver’s hospitality sector will shrink significantly if businesses don’t get further support from the government, says a spokesperson for the city’s hospitality association

“Estimates, if government help doesn’t get extended is, we’re looking at likely in the area of 80 to 85 per cent of these business will not reopen,” says Laura Ballance, the communications director at Hospitality Vancouver Association, whose members include bars, restaurants, pubs and nightclubs.

Ballance said that Vancouver has many family-owned businesses, as compared to places like Toronto, where a lot of the hospitality sector is owned by large investment groups.

Smaller businesses don’t have as much expendable cash to account for reduced clientele or to spend on alterations that might be needed for their establishment to meet health and safety regulations, making them more vulnerable.

As well, she emphasized that losing a business is more than a financial loss for local hospitality businesses when faced with closure.

“The owners are more emotionally invested — they do it because they love it,” said Ballance.

And for the venues that are able to weather the storm, it might not be business as usual when they are finally given the green light by health officials to reopen.

Ballance thinks owners may have to change their structure to fit a new normal.

“Health officials will at some points say it’s okay to gather in groups, but then there’s also going to be the court of public opinion. We don’t know if people will be comfortable, or even if reopening looks forever changed,” she said. “If there’s a vaccine and it’s effective, do we go back to 15,000-person concerts in an arena or is it forever going to be a two–metre distance? So the economics around those events will change dramatically.”

While businesses in many sectors have been impacted by COVID-19 measures, the interactive nature of entertainment venues makes ensuring physical distancing challenging.

The Red Room, a popular Vancouver music venue located on the edge of Gastown, shut its doors on March 14 and has not since reopened.

The family-run venue used to serve about 80,000 patrons a year and hosted local and international acts.

Owner and operator of 40 years Dale McRitchie said he wants guidance from the government on what regulations he needs to follow for his business and updates when those change.

“I phoned the Vancouver health board for the city of Vancouver and asked them what was going on way back in the day when we were slowly allowed to re-open back in May, but even they were not really up to speed on what the requirements were and how many people you could have (in a venue)” says McRitchie.

“We’ve had no answers from the people who are controlling this situation.”

In March alone, 11 per cent of active businesses closed. While 3,851 businesses were closed in January 2020, that figure almost doubled by March. 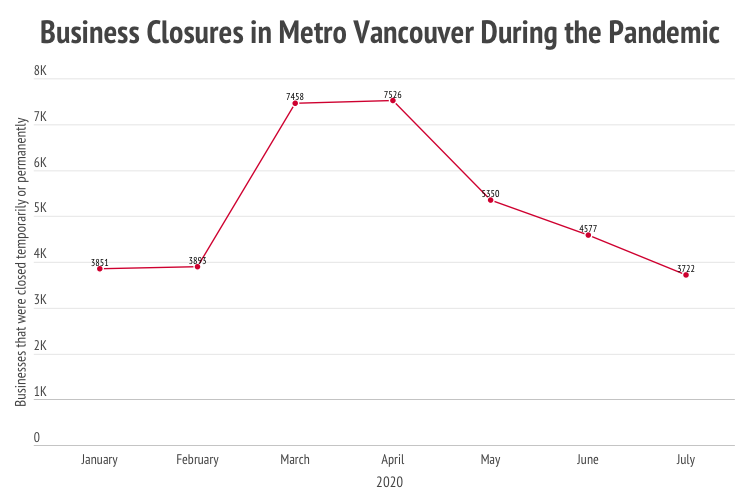 Business closures peaked in the initial onset of COVID-19, from February to March. Over the summer months, the number of active businesses slightly increased. McRitchie says he has ensured that his business can survive until June of 2021, but if operations don’t resume or government funding doesn’t increase before then, he will have to make some decisions regarding the future of the Red Room.

Some venues and musicians have successfully received provincial government grants from initiatives such as AmplifyBC. The Red Room was one of those recipients.

The provincial government invested $7.5 million into AmplifyBC to support the music industry. With rent, insurance and property tax bills still looming, McRitchie says his business could use at least three times the amount they received.

The closure of venues like the Red Room also leaves local artists without chances to perform. Some musicians have turned to online platforms such as Facebook or Twitch to stay engaged with fans and share their content.

The Potatohead People is a Canadian hip hop/electronic producer duo from Vancouver, B.C., that has also received funding from AmplifyBC. Nick Wisdom, one half of the duo, said the lockdown could be helping to expand their fanbase despite the band not having performed in person since the start of the pandemic.

The act has seen an estimated 25-to 30-per-cent growth in their social-media engagement since April, as well as charting on CBC Music’s Top 20.

“Maybe people are taking the time to dig into the things that they’re interested in a little more,” said Wisdom.

But with venues remaining closed or shutting down for good, the future is uncertain for artists and venue owners alike, he wonders.

“Are the jobs going to be there for us to go back to when this is over?”

Rob Hechler feels more at home in Vancouver, due to the high rates of mixed Asians in the city

Police will rely on older tests to check drivers for cannabis

From pretty packaging to unique products, the unregulated CBD industry on Instagram is enticing many.

Vancouver looks for a strategy to reduce plastic bags