A BC Transit bus approaches a bus stop in Squamish, B.C., with signage informing riders that face coverings are mandatory.

Public transit across the country continues to take a huge hit in ridership as the COVID-19 pandemic continues and transit agencies say they are uncertain when it will recover.

Ridership in November 2020 is down by 64 per cent nationwide compared to the previous November, according to new data from Statistics Canada.

Public-transit use has fluctuated since the onset of the pandemic. There have been some upticks between April and September as provinces put safety plans in place, but ridership has remained well below 2019 figures throughout 2020.

Transit representatives are unsure of when it will come back.

“There is too much uncertainty to say what will happen to ridership,” wrote Gabrielle Price, a TransLink spokesperson, in an emailed statement.

TransLink, the Metro Vancouver transportation authority, estimates it could take between two and eight years to return to pre-COVID ridership levels, according to its 2021 Business Plan.

“We are monitoring the situation every day for changes and updating our forecasts as major developments occur,” Price said.

While transit use is down across the country, statistics show ridership is rebounding at different rates in different regions.

Ontario and Quebec remain in the biggest slump, with ridership down 67 per cent when comparing ridership figures from November 2020 to 2019. In B.C., the prairies and the territories, that dip is about 60 per cent while the Atlantic provinces are down about 46 per cent.

Across Canada, only 59 million passenger trips occurred during November, which pales in comparison to the 164.8 million trips from just a year earlier. Ontario and Quebec reported the worst loss with approximately 73.9 million fewer passenger trips. 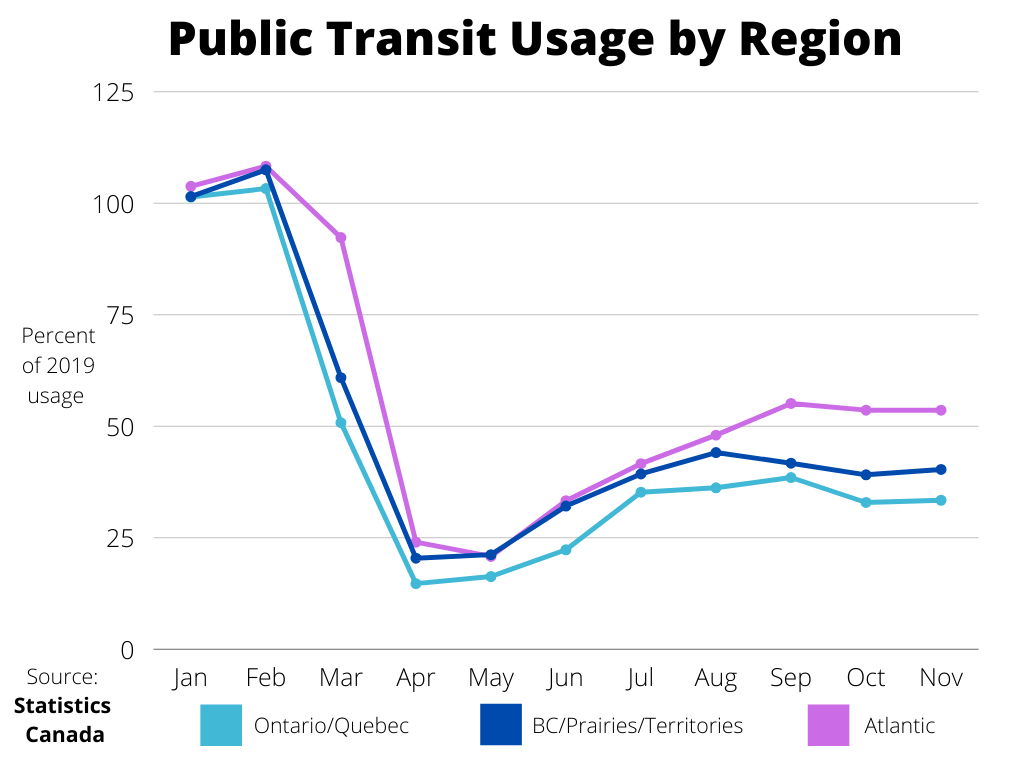 Dave Reage, the executive director for Halifax Transit in Nova Scotia, said the difference between transit usage across the country is a reflection of the different rates of COVID-19 infections.

“I think the biggest difference is our very low case numbers,” he said in an email.

Reage and his counterparts across the country recognize that getting more people back onto public transit will depend on several intersecting factors — for starters, the state of the pandemic and efficiency of the vaccine rollout.

“We’re seeing a potential shift in travel behaviour unlike anything we’ve seen before, so much is unknown.”

That unknown has layered implications for service providers like TransLink, which relies on several revenue sources for its operating budget. In 2019, transit fares accounted for 58 per cent of TransLink’s operating costs, with the majority of additional revenue coming from fuel and property taxes.

Now, TransLink is relying on government relief to help balance the books until ridership recovers over the next few years.

It’s unclear what kind of support those transportation agencies might get after the 2021/2022 fiscal year. If ridership stays low, TransLink’s current revenue system could be unsustainable if the government doesn’t step in again.

B.C. is not the only province that has sought government relief funding since the pandemic hit.

Ontario, which has suffered the worst ridership drop, has committed up to $2 billion to help municipalities keep transit systems running.

And Lee Alderson, a spokesperson for the Ontario Ministry of Transportation, expects ridership recovery to vary across the country. Getting people back on board will depend on reducing “as many barriers as possible to incentivize riders back to transit in a safe manner,” he said.

Some of the approaches seen to date across Canada have included offering free transit access to children under 11 and minimizing fare increases.

Majd Agha is in some ways a typical 22-year-old who has just arrived in Vancouver. He goes to college, has a part-time job, and takes English classes in the evening.

From bringing in more Black artists to rewriting object descriptions, there is more to be done on decolonizing Black representation in museums, experts say.

School rankings put to the test

Condo development in the DTES is a hot topic. A survey carried out by the Low Income Land Use Housing…