A passenger leaves the Expo line at the Commercial-Broadway station and walks down an empty platform.

Azul Herrera Martinez-Vara has been using Vancouver public transit for over five years. She rarely felt unsafe, until last year.

“I feel like the energy, especially downtown, has been more aggressive,” said Martinez-Vara. “I live in Burnaby and I haven’t seen like this much violence in transit as I do when I come downtown.”

Martinez-Vara said that the pandemic has increased tensions and changed the way people on transit act. She said she sees more fighting between couples and more people smoking and drinking inside SkyTrain stations.

Her perception is backed up by recent data from Metro Vancouver Transit Police.

Although the absolute number of crimes on transit has decreased — in large part because of lower ridership — the proportion of passengers attempting to commit crimes against other people on transit increased by 81 per cent in 2020 compared to 2019, according to statistics provided by transit police.

Additionally, the proportion of passengers attempting to steal or damage property increased by 75 per cent while the rate of other criminal violations also rose 60 per cent in 2020. 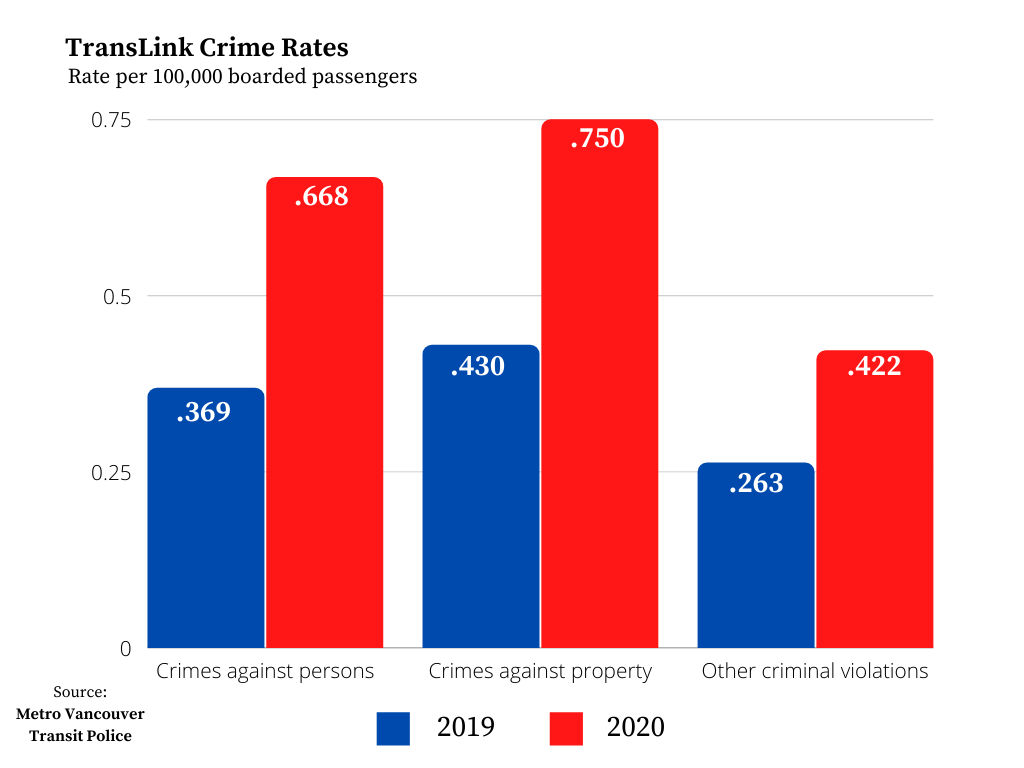 The increased crime rate comes at a time when ridership on the system is about 40 per cent of what it was before the pandemic.

“Although ridership dropped off drastically, those that were using the [transit] system to either facilitate committing crime, or committing crime on the system, continued to do so,” said Clint Hampton, media relations officer for the transit police.

The passengers who commit crimes may also feel emboldened because there are fewer people on transit, according to research from other cities.

In October 2020, the New York Times wrote about an increase in the number of violent crimes committed on that city’s subway system. Transit officials noted that a drop in ridership may have helped lead to violent acts because there are fewer witnesses.

That was certainly the experience of Vancouver bus driver Shagun Malholta, who was assaulted by a passenger on the evening of Feb. 17.

The passenger was a free-rider whom 29-year-old Malhota picked up downtown. He appeared to be  intoxicated and was agitated from the start but turned aggressive after everyone else left the bus.

Malholta also believes he deliberately urinated on a seat.

“I pulled over and I opened the door to let him off. But he just ran from the back … stepped on the farebox platform, [reached over the barrier], and punched me right in my eye.”

Malhota doesn’t think he would have assaulted her if there were other passengers on the bus. 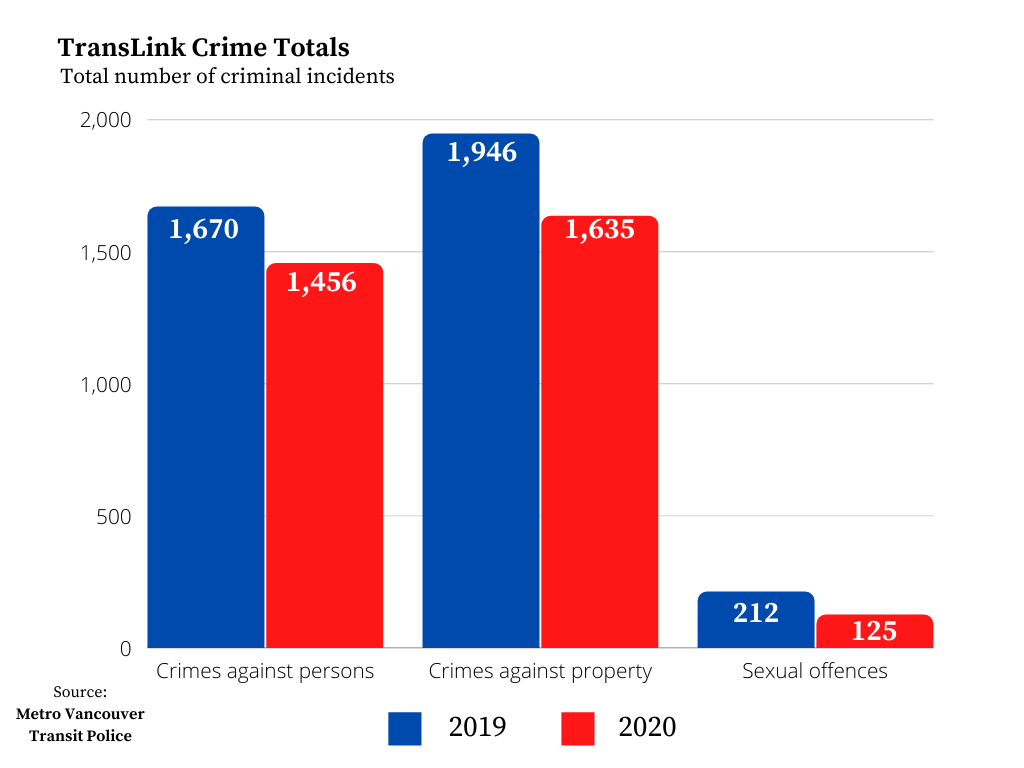 In spite of the greater rate and visibility of crime on regional transit, many say they aren’t seeing huge problems when they use it.

“To me, the bus has remained safe and comfortable,” said Sebastian Lloyd, a 34-year-old employee at The Gourmet Warehouse. “I don’t think it has been any worse.”

Lloyd did say that he only takes the bus during rush hour and tries to avoid taking it at night, when it might be less busy. He said he also avoids bus routes that have a bad reputation, such as the 20 and 14, which run through the Downtown Eastside.

The crime rate on the transit system will go down once riders get back onto transit. Yet TransLink estimates that it may take two to eight years to return to pre-COVID ridership levels, according to its 2021 business plan.

“Moving forward, I hope to see the crime trends moving down,” said Hampton. “But really it remains to be seen. Well, we’ll have to see how things go moving forward.”

Hampton reassured the public that transit is still safe and encouraged passengers to text 87-77-77 if they have any issues or witness a crime.

When Kerry Porth worked with the Vancouver police department in 2012 to create new rules on sex-work regulation, she had…

Getting the dirt on Vancouver’s tree roots

Moving to a new city can be a lonely experience