The smell of freshly ground aromatic coffee beans fills Think! Coffee Lounge and Bistro on West 10th Ave. as independent shop owner, Greg Lomnes, steams milk from the espresso machine to make his first latte of the day. But, increasing business property taxes in Vancouver are threatening small businesses such as Think!, which have to compete with larger chains. 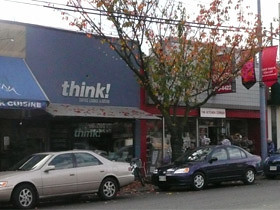 When Think! first opened in 2003 its lease was $3,800 including taxes. Its taxes were $700 of the total, increasing about 57 per cent to $1,100 this year. Rising property taxes hurt his business because this extra money goes to the city instead of his bottom line.

Lomnes isn’t the only one affected. Businesses are paying 52 per cent of shared municipal taxes compared to residents who pay 45 per cent, according to City of Vancouver’s Property Tax Policy Review Commission’s Final Report for September 2007. Vancouver businesses are shouldering an uneven proportion of the tax burden, compared to neighbouring municipalities such as Richmond for the same year. Richmond businesses pay 45 per cent of the property taxes for the city compared to residents who pay 50 per cent.

The easy approach is to say that “business can afford it – tax the business,” said Lomnes, adding he is appalled by the difference in property tax rates. He argues that larger chain coffee shops such as Starbucks and Tim Horton’s can easily absorb extra costs.

Others are on his side. The Vancouver Fair Tax Coalition (VFTC) argues that business property owners are paying an unfairly balanced amount to residential property owners.

VFTC has started to get on side – recommending to the City of Vancouver to chart a 20-year course to help balance the commercial to residential tax ratio permanently to match regional and national averages. The City of Vancouver’s Property Tax Policy Review 2007 indicated that businesses in Vancouver are paying the highest municipal property tax shares in 2006 in comparison to the rest of Metro Vancouver. 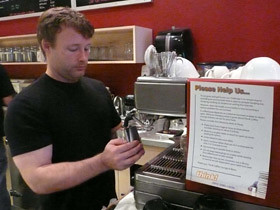 However irate business owners are, Liz Jones, financial analyst for the City of Vancouver, said that “the overall amount of property taxes collected by the city each year does not depend on property values. Rather, each year, council determines the total amount of property tax revenue required to balance the municipal budget. Council also decides what share of the total tax revenue is to be collected from each of the seven property classes.

She also said that, “Municipalities take differing approaches to their property tax policy and to how the apportion taxes among property classes; [therefore], comparing municipalities is not a straightforward exercise.”

According to Jason Grant, assessor for BC Assessment, properties are first assessed for its market value. Then notices are sent to owners and various taxation jurisdictions in January to determine the property tax rates in a given municipality.

The city’s Revenue Services reported that in Vancouver, the assessment of land is increasing not so much the value of the building.

Jones added that the city endeavors to provide ongoing information on property taxes and how they are calculated.

Help me help you

Lomnes has taken matters into his own hands rather than passively wait for changes to ensure his business’ survival – signs that say “Please Help Us…” in the form of bookmarks and posters have emerged around Think!. 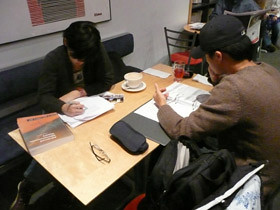 With an average transaction of $3.50, Lomnes needs to make about $700 per day in sales to sustain the business.

Unlike other industries, coffee shops run the risk of attracting coffee shop campers – those who buy one coffee and stay for the remainder of the day not buying anything else.

He hopes that by educating his customers about Vancouver’s business landscape, he will gain their cooperation to help him to sustain business while preserving their beloved hangout.

Regular, Shu Lin Wee, a graduate Economics student at the University of British Columbia, has been studying at Think! since her second year of university. She is supportive of Lomnes’ campaign and believes that customers should not abuse their privileges.

“He’s being honest and he needs to make sure he is making some kind of income,” she said. “It’s not in your face, and it appeals to the common sense.”

Katherine Marion, a chef and regular, does her paper work and some homeschooling at Think! because of the availbility of internet. She said she appreciates the owner’s generosity.

Taking a sip from her cup of tea, she adds, “when you invite people to your place of business, you are sharing your wealth, and the returns are manifold in ways that one may never imagine…it evens out – respect for generosity.”

Lomnes continues to work hard to make his business known for more than a student coffee hangout.

“I’m working 12 hour shifts, but I’m not getting any richer.”

Manitobans are responding with new ways to stay active when indoor gyms, pools and rinks are closed

For almost 20 years, Alfred and Angela Chan fashioned floral arrangements and sold them to a loyal community of customers…

Vancouver, much like other tech hubs around the world, has experience tremendous growth when it comes to entrepreneurial cooperatives such as incubators, accelerators and co-working spaces.

Canadians will see more trucks on the road, will earn less abroad for their products and will lose import business…