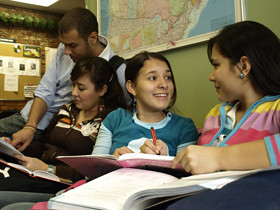 “You don’t need to tell me if you didn’t have any of the answers right, it’s okay,” said instructor Jeannie Weng to the students who struggled with pocket dictionaries and electronic translators in her class on Oct. 22.

The safety seminar Weng teaches is offered by the Chinese Community Policing Centre (CCPC) to English-as-a-second-language (ESL) schools in Vancouver.

The lessons are practical, and include what police officers look like, what traffic signals mean and how to keep safe when you go out at night.

The seminar helps ESL students get through the barriers they can face in accessing help from emergency services and law enforcement in Vancouver.

ESL students have a greater “safety-security” risk than other Vancouverites, said the director of the CCPC, Chris Beach, who is also a retired Vancouver police officer.

“The risk is really that you take a young person who has never been away from home before, give them perhaps more freedom than they’ve ever had before, and that combination of immaturity, and unfamiliarity, and freedom, that’s where they can find themselves in trouble,” he said.

What to do in an emergency is the most important lesson in the course, according to Weng.
Only two of the 17 students in her class knew they can speak their own language on a 911 call and be understood.

Weng taught the other 15 that Vancouver’s 911 service, E-COMM, has interpreters for 170 languages.

You can forget your words when you’re nervous, she said. 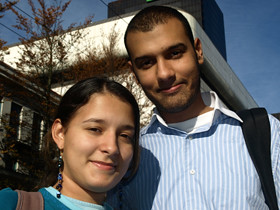 Weng’s lessons don’t get through to all of the approximately 17,000 students in the more than 40 ESL schools in Vancouver.

The CCPC has trouble selling the seminars to some schools, even though they are free to the schools and students and take only one hour, said Beach.

“I find it ironic that it’s this free thing that is in no way going to harm the students, in fact it’s all for their benefit … and schools may be reluctant to get involved,” he added.

“Forwarned is forearmed,” he said.“[The seminars are] also important because a lot of people who come here come from countries where they don’t trust the police. They wouldn’t think of calling us if there was a problem.”

When someone with rudimentary English skills does contact the police in a non-emergency situation, communication can be “tough,” Fanning said.

“We usually are able to get through. We always find a way. We have to.”

The VPD uses community resources, such as the CCPC or the Multilingual Multicultural Non-profit Association (MOSAIC), when there is no in-house interpreter who speaks the right language.

In a non-emergency situation, the VPD can “resort” to having a three-way phone conversation with the victim or witness and a translator from the service used in an emergency, Fanning said.

Twenty-five percent of students surveyed by the Canadian Association of Private Language Schools (CAPLS) in February said that Canada being a “safe place to study” was their number one reason for choosing to come to Canada to improve their English. Another 21 per cent gave that answer as their number two reason.

A student from Russia, Svetlana Simonova, 28, witnessed a robbery at a Starbucks in her break between classes at VanWest College the morning of the safety seminar, she said.

“He was maybe on drugs,” she said of the thief, who calmly walked out of the store with bags of coffee, and then dropped one and ran away.

However, she still thinks Vancouver is a safe place to live, she said.

Students at Inlingua ESL school downtown said they haven’t received information about police or 911 at school.

Gabriela Barrera, 17, and Andres Castans, 24, both think Vancouver is safer than their home cities in Colombia, and said they noticed there are many police patrolling the streets downtown near their school.

Daniela Garoa Bedoya and Luisa Durango, both 17 and also from Columbia, said they have learned some tips about keeping safe in Vancouver from their friends and host families: “Don’t walk alone at Hastings and Main.”

As Vancouver’s high housing costs force more young adults to live at home, they are realizing there’s not much in…