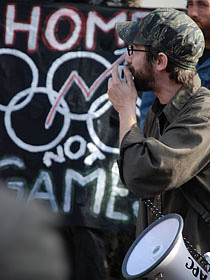 Government and advocacy organizations went head to head on housing issues during Homelessness Action Week, Oct. 15 to Oct. 21. Below are three major events that took place during the week.

* The provincial government were first to weight in, announcing Oct. 12 that it would spend an additional $41 million on housing initiatives.

The funding will go toward 24-hour shelter beds, increased outreach services, increased rental subsidies and a fast track zoning plan for city land to be developed for housing.

* The Anti-Poverty Committee (APC) planned to squat in a building in Burns block of the Downtown Eastside Oct. 14. Their plans were thwarted when police arrested six APC associates the night before and guarded other potential buildings in the area. Two hundred protesters marched to the city jail to protest the arrests. Police headquarters were locked down with chains during regular hours in advance of the march. More than 50 officers monitored the procession. 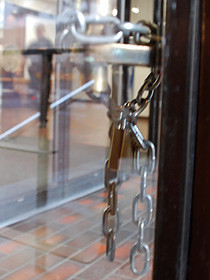 * A tent city, organized by Streams of Justice, was set up Oct. 15 at 950 Main St. in a vacant site slated for social housing over five years ago. Rain and foul weather battered the 15-person settlement all week long.

“We want to see tent cities legalized. If you cannot build us housing, give us a park,” Rose Henry, a one time homeless person, told UN representative Miloon Kothari.

Police arrived at the tent city early that morning but let the group stay pending a court decision. The tent city was taken down voluntarily Oct. 21 at the end of Homelessness Action Week.

Take the Homelessness Action week quiz: How much do you know about homelessness?

Muslim students reach out like never before to fight Islamophobia

Hate crimes against Muslims have increased dramatically in recent years

A new face for Musqueam politics

Every two years, the Musqueam First Nation in southwest Vancouver elects a 10-member council and, at its head, a chief….