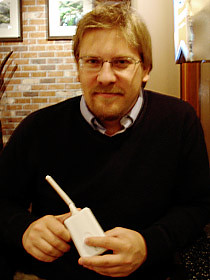 A group in downtown Vancouver has decided to bring wireless Internet to the masses, saying they can do it faster and better than the city.

“We don’t have to wait for the city to get their act together, or for a commercial service provider to finally bless us with some overpriced service,” said Boris Mann, a member of Free the Net, a Vancouver group whose website proclaims, “We’re connecting Vancouver, 1 block at a time.”

Free the Net is a volunteer organization that only began setting up wireless in downtown Vancouver in mid-September, but already has approximately 30 wireless transmitters in operation, each providing free Internet access to anyone within a 150-foot radius. Over 1000 people have connected so far.

The ultimate goal is to “blanket all of Vancouver in free wireless.” Mann envisions a future where tourists could walk down Water Street and access the Internet and local information through their cell phone or laptop, and where people who could not normally afford Internet access are able to get online.

Municipal programs to set up wireless public Internet access have a dismal track record in North America. Most fail after only a few years or never getting off the ground due to high setup costs or a lack of interest. Community groups are increasingly filling the gap, spreading their own wireless networks across downtown areas so that anyone within range can get on the net.

Free the Net is not the first group to take wireless access into its own hands. Île sans fil (Wireless Island), an organization that has operated for four years in downtown Montreal, currently has about 140 “hotspots” or wireless access points, serves approximately 40,000 registered users and is still growing. Similar organizations exist in Toronto, Quebec City, Seattle, and other cities across North America.

Richard Lussier, a spokesperson for Île sans fil, believes that municipal wireless has not worked well in Canada because of the grand scale of the projects, which typically involve public-private partnerships and huge investments in infrastructure. Such projects, like Toronto’s frequently criticized OneZone project, often prove unsustainable or are contracted out to private companies who have to make a profit. They then begin charging user fees, which drive away consumers. Île sans fil’s projects, he said, are on a more human scale and are succeeding because of this.

Some municipalities have managed to stay in the wireless game. The city of Fredericton, New Brunswick, has built a free wireless network across its downtown, where anyone with a wireless-capable machine can access the Internet from anywhere within the wireless bubble. The Fred-eZone, as it is called, was built and is paid for by the City of Fredericton and is provided to citizens as a free public service.

Fredericton’s vision is in line with that of Free the Net. “We want to think of wireless Internet as a utility, like water,” said Mann. 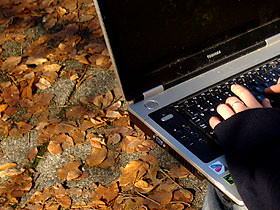 This brings up the issue of payment. Internet access through Free the Net is currently free but might not stay that way. This is a point of contention within the Free the Net organization, with some members wanting to stay far away from any kind of pricing scheme, while others, including Mann, see the possibility of a sliding payment scale sometime in the future. In an interview, he was careful to emphasize that Free the Net does not necessarily mean free in the monetary sense, but is more about equitable access for everyone, or “free as in freedom.”

While these issues are important to Free the Net members, they do not seem to have diminished the enthusiasm of the admitted “techies” who form the group’s core membership. One member described his reasons for hosting a wireless connection as “more playing than anything,” and the group as a whole seems to enjoy the challenge and promise of a fairly new technology.

“Why did we do it?” asked Mann. “To see if we could.” So far they are on track, well ahead of any municipal or commercial scheme in Vancouver.

Find out how Free the Net’s model works, and learn about wireless Internet in Canada.

Early one morning in 2009, the Texas Department of Public Safety’s SWAT team approached the home of an Austin man…

A Vancouver company is pioneering a new technology for raising money through social media. As hundreds of charities compete for…

— By Shanshan Lu — In recent years, more and more high-tech multinational companies have chosen to come to Canada,…