The origins of Halloween 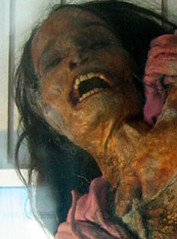 Halloween is a holiday based on remembering the dead, and them coming back to visit you.

The origin of Halloween was an ancient Celtic celebration, called Samhain. October 31 is the day before the Celtic New Year, and the day when the Celts believed the worlds of the living and the dead would blur. Druids, the ancient Celtic version of priests, were thought to best predict the future at this time when the old year was ending and a new one beginning. Participants in Samhain would gather around a bonfire wearing costumes, usually made out of animals, and tell each others’ fortunes.

The advent of Christianity changed November 1, the Celtic New Year, into All-Saints’ Day — known as All-Hallows in Middle English. The night before became All-Hallow’s Eve which eventually turned into Halloween. For more see: History.com. Also, see how they celebrate The Day of the Dead in Latin America.

Check out these East Van Halloween Events this Saturday, October 27

2. Britney Spears (under the influence)

Or anything meeting the requirements: Too soon, too real and too tragic (California wildfire anyone?)

It’s a drizzling Wednesday night on Commercial and East Broadway Street in East Vancouver. The glaring yellow streetlight illuminates about…

No “Punjabi” name for Skytrain station

Live drumming signals the start of a new exercise in Edmond Kilpatrick’s boys-only dance class. The group of 13 six-…