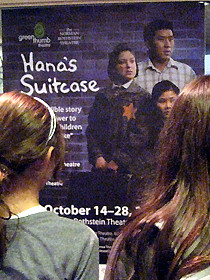 When the curtain drops on the award-winning play, survivors mount the stage to share their stories with the school groups in attendance. Like the children in the audience, most of the survivors were very young when World War Two broke out.

“This is big,” confirmed Vancouver author and Polish Holocaust survivor Lillian Boraks-Nemetz. “Vancouver’s never had a production like this one before.”

The play tells the story of 13-year-old Hana Brady whose quiet Czechoslovakian life was destroyed by the Nazis in 1942.

The Holocaust testimonials bring authenticity to the production, said Ivan Habel, general manager of Green Thumb Theatre, the company co-presenting the show. “Kids need to understand that what they’re watching was someone’s real life,” he said.

“Good theatre is challenging and engaging,” said Habel. “Audiences should feel emotionally and intellectually involved in the play.”

Even though they are not on stage, the kids participate in Hana’s story. The play, Habel said, encourages children to ask questions and demand answers.

The Norman Rothstein Theatre has been packed this week, filled with students from across the city. With every seat occupied, children often spill into the aisles. They watch the play intently: reacting with laughter, chatter and silence. 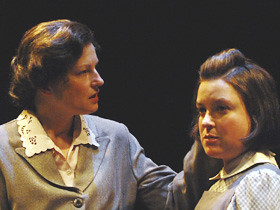 Based on Karen Levine’s awards-winning book, the play premiered to sold-out houses at the Lorraine Kimsa Theatre for Young People in 2006. Its spectacular success prompted a second Toronto run and tours to Edmonton and Winnipeg.

The play opens when Hana’s 55-year-old suitcase arrives empty and unannounced at the Tokyo Holocaust Education Centre. The small case captures the imagination of two young Japanese children and the centre’s curator, Fumiko Ishioka. Compelled by their desire to know who Hana was and what happened to her, Ishioka embarks on a journey that takes her all the way to Auschwitz.

Overwhelmed by the sorrows of six million dead Jews, the disheartened Ishioka asks a colleague: “How much do you tell children about what happened? How much of the horror do you describe?”

The difficult but honest answer is: “I tell the children everything.” Although they realize that there are still more questions than answers, the two Holocaust curators agree that every terrible detail must be shared so the mistakes of the past are not repeated.

The survivors’ stories help students recognize that Hana Brady was a real person. Like other children, she went to school, played sports, drew pictures and had hopes and dreams before WWII.

Lillian Boraks-Nemetz thinks it’s essential for survivors like herself to share their experiences, especially with the younger generations.

Learning about the past helps people “identify and understand what made them who they are,” she said.

Boraks-Nemetz has been sharing her story with children and adults for 25 years. An award-winning children’s author, her participation with Hana’s Suitcase was facilitated by The Vancouver Holocaust Education Centre.

Talking about her escape from Nazi-occupied Europe is never easy, but Boraks-Nemetz recognizes the important effect her story has on young people.

“When you look at the world and see what things are happening today and what has happened to other people, [my story] makes kids appreciate their families being whole, and having food and being free,” she said. “After all, what could be worse than losing your human rights?” 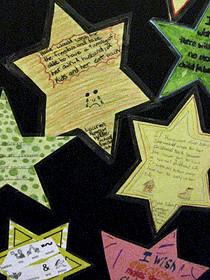 Although they know they cannot save Hana, students who see the play realize they can affect change and work towards a war-free future.

The declaration of one young Edmonton girl following a 2006 performance will forever standout in the actress’ memory. When asked why it is important to tell Hana’s story, the small girl stood-up before the entire audience and shouted at the top of her lungs: “So that there will be no more war!”

Classroom resource guides help teachers with the questions that arise after the performances. Back at school, students discuss Holocaust facts and ask why children are still dying in wars around the world. Together they write wishes for a peaceful future on hand-made paper stars. The aim is to create 1.5 million stars: one for each child who perished during the Holocaust.

Hana’s story has inspired children worldwide, bringing the unknown orphan back to life, almost 65 years after her Auschwitz death.

Hana’s Suitcase will play at the Norman Rothstein Theatre until Oct. 28.

Things you should know about the BYRC

By Dan Haves The centre has been in place since September 1999. It is open to anyone between the ages…

Joly is one of 313 musicians in B.C. feeling the strain on Creative B.C.’s $15-million music fund

It’s a drizzling Wednesday night on Commercial and East Broadway Street in East Vancouver. The glaring yellow streetlight illuminates about…

Existential approach gets a second life