North Shore Mountain bikers have made their voice heard with local government, despite not saving all the trails they wanted on Fromme Mountain. 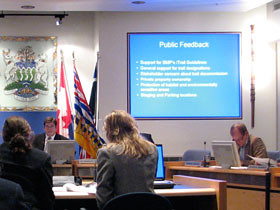 Advocates for the sport have been trying to save their beloved trails, while conservationists have been trying to close them to prevent environmental degradation. The Fromme Mountain Trail Classification Plan, which was presented to the District of North Vancouver (DNV) council on Monday, was created to resolve these often competing interests.

The consultation, which has gone on for eight months at a cost of $60,000, is in stark contrast to other municipal involvement, such as the “chainsaw massacre” of 1999 when West Vancouver destroyed numerous trails without consulting the mountain bike community.

“What we do in this community, better than any other community, is we consult, we consult at great length,” said DNV mayor Richard Walton. “This plan is unlikely to be tampered with for a generation or more, so we want to get it right.”

The North Shore Mountain Bike Association (NSMBA) also wanted to get it right, so they made a concerted effort to get involved and communicate their views.

“We’ve made huge inroads in dealing with [the District] this year,” said Dan Gronross, a director of the NSMBA. Gronross said membership has grown 20 per cent this year to more than 3,000, which helps in getting government to listen.

This includes DNV section manager of parks, Susan Rogers. “We have much more of a partnership with the NSMBA which we didn’t have at the beginning. They’ve really come to the table and worked with staff very proactively,” she said.

Despite the increased advocacy, however, the mountain bikers did not achieve a “no net trail loss,” as many had hoped.

The consultants who produced the plan estimate that of the current 83km of trails, 54km should remain. Gronross was optimistic however. It’s better to have one really good trail than three bad ones, and they have managed to save many of their favourite ones, he said.

There are those on both sides who are disappointed with the plan. Local resident Lyle Craver thinks that the plan favours mountain bikers over conservation. “I don’t think the balance was there at all … [the plan] is heavily slanted toward maximizing the use of the mountain,” he said. 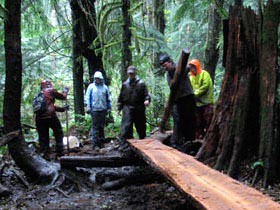 But as Mayor Walton said, “You never achieve a full consensus.”

Darren Butler, who runs mountain biking programs, sees the whole process as part of the greater trend in mountain biking to become more standardized and sustainable. He pointed to the Mountain Bike Operations Certificate program at Capilano College, the first of its kind, as an example of the sport becoming institutionalized and more legitimate.

Trail maintenance days are another example of the growing responsibility the NSMBA feels towards the mountain. Held monthly, the days can attract over 100 participants, with shovels and chainsaws in tow, to help repair trails and prevent harmful erosion.

Jeremy Power, a professional trail builder, said the NSMBA contributes about 85 per cent of the funds that go towards trail maintenance, with the DNV and Metro Vancouver contributing the rest. He also pointed out that they work on all the trails in the woods, not just bike-specific ones. 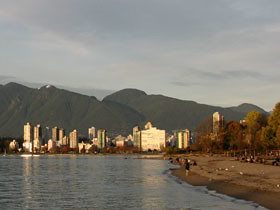 Maintenance has become increasingly necessary as the popularity of the sport grows, and concerns about environmental degradation increase. The proximity of Vancouver makes it easy for lots people to get to the mountain; The Western Canada Mountain Bike Tourism Association estimates that there are over 18,000 rides a week on the North Shore.

David Croft, who moved to North Vancouver from Australia to ride, has been to six trail maintenance days, even though he has only managed to bike the mountain once. He is very interested in the trail building on the North Shore because shoddy trail building in parts of Australia has led to strong opposition to the sport. It is a problem mountain biking faces internationally, which makes the pioneering efforts of the NSMBA all the more important.

Stanley Park works to nurture herons in centre of the city

Cities often drive out animals, but Vancouver has managed to keep one unique species in the heart of the city

A University of British Columbia professor hopes research will promote peace journalism in the world of sports writing. Kinesiology professor…

Minor hockey in B.C.   [column size=”one-half”]Fewer minor hockey registrations have triggered a premature anxiety that the nation is losing…

The high winds of the Easter weekend brought trees crashing down in Vancouver’s parks and across roadways. In addition to…