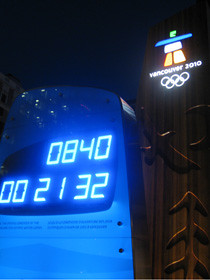 Vancouver’s Olympic Committee (VANOC) is upping its anti-doping measures by increasing the number of pre-competition drug tests for the 2010 Olympics in Vancouver to catch cheaters before they reach the podium.

“We know that the cheaters are using more and more substances before the competition than during and after the competition,” said Patrick Schamasch, the medical and scientific director for the International Olympic Committee (IOC) from Beijing, where he was attending a meeting. “That is why we want to increase the testing, unannounced, pre-competition.”

In an effort to strengthen the anti-doping measures, VANOC has raised the number of drug tests it will conduct to 2,000 for the upcoming games. This is a significant increase from the 1,200 tests done during the 2006 Turin Olympic Games. Patrick Schamasch said the increase in Vancouver will be mainly on pre-competition testing rather than in-competition testing.

Pre-competition testing involves the collection of blood and urine samples from athletes in advance of the actual day of competition. The testing is random and unlike in-competition testing, they aren’t based on the results or rankings of the athlete after the sporting event itself.

Many believe the increase of the number of pre-competition tests is the most effective means of detecting and deterring athletes from doping during the Games.

The testing period for the Games begins on the day of the opening of the athlete’s village, and finishes on the day of the closing ceremony. Within this period of time, athletes can be subject to testing at anytime and in any place.

Doping cases from past Olympics

An unannounced test conducted during the 2006 Olympics Games in Turin, Italy resulted in about the harshest penalty for doping in the modern age of the Olympics. The IOC banned six Nordic skiers indefinitely from the Games after officials found quantities of banned substances in the team quarters. Responding to a request from the IOC, the Italian police raided the Austrian cross-country and biathlon teams’ camps looking for evidence of blood-boosting drugs. Contents found included syringes, glucose drips, blood bags, intravenous infusion and other medical supplies.

Endurance sports may have the potential for more cases of doping in comparison to other sports events during the Games. Sports such as cross-country skiing and the biathlon have a history of doping. At the games in Salt Lake City, Johann Muehlegg of Spain was forced to return his third gold medal after testing positive for the blood-boosting drug darbepoetin (NESP). Russian cross-country skier, Larissa Lazutina was also stripped of her gold in the 30-kilometer race for having traces of the same drug in her system.

“The more endurance sports the more there is some attraction to looking at doping,” said Lynda Cannell the president and CEO of SportMedBC.

In addition to testing, VANOC is partnering with the Canadian Centre for Ethics in Sports (CCES) to provide education and awareness about doping and cheating to athletes. The team will work with the National Olympic Committee and Paralympic Committee to provide anti-doping resources including online outreach programs and video presentations to athletes. This campaign is but one initiative by the organization to bring ethical values back to sports.

“I think the couple of approaches – tests and education are key,” said Schamasch. “It is one process in the fight.”

VANOC’s plans for cracking down on doping will not be finalized until the World Anti-Doping Agency (WADA) releases its revised Code, slated for release on Jan. 1, 2009. At that time, VANOC will reconfigure their anti-doping measures to reflect the provisions set forth in the Code.

Scalpers struggle during hockey lockout but get little sympathy

The NHL lockout is going to have a significant financial impact on many ticket scalpers. But hockey fans aren’t showing…

A glimpse into the world of moguls

By Krysia Collyer Moguls skiing is an exciting spectator sport. There are many different elements to the competition, and having…

A University of British Columbia professor hopes research will promote peace journalism in the world of sports writing. Kinesiology professor…

Canadian officials are debating their next move after the U.S. Soccer Federation banned heading the ball in youth soccer in early November.  The USSF guidelines…