1991: A memorial march in honour of the missing women is held in Vancouver’s Downtown Eastside. Participants hope to pressure the police into launching an investigation.

1995: There is a sudden increase in the number of missing women. 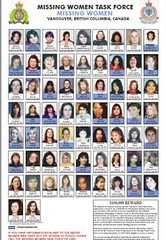 1998: Families and relatives notice another increase of missing women, and suggest to Vancouver police that a serial killer might be operating in the Downtown Eastside.

1999: Vancouver Police Board offers a $100,000 reward for information about 27 women who had gone missing since 1978, after receiving pressure from the public. Two Vancouver detectives team up in the spring with two RCMP detectives to review a file that contained details about 31 missing women. Georgina Papin and Brenda Wolfe disappear.

2001: Yet another increase in the number of missing women. Andrea Joesbury, 22, is reported missing, as are Sereena Abotsway, 29, and Mona Wilson, 26.

January 2007: Murder trial for six of the women begins.

December 2007: Pickton found guilty of second-degree murder in the deaths of the six women and sentenced to life in prison without parole for 25 years.

A determined group of residents in Vancouver’s West End have taken to the streets in protest every Saturday since October. …

Actress brings Shakespeare to the deaf through sign language

B.C. currently leads the country in rates of self-employed workers

A history of compromising photos