Kat Norris could learn some lessons in longevity from two of the great-grandmothers whose protests against the Olympics made headlines this year. 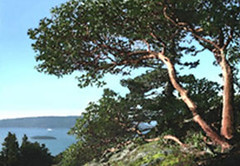 Harriet Nahanee was a staunch advocate for Aboriginal rights and environmental issues. The 71-year-old great-grandmother died on Feb. 24, 2007 at St. Paul’s Hospital in Vancouver following a weeklong incarceration in the Surrey Women’s Pre-Trial Centre.

Nahanee was sentenced to 14 days in prison for protesting the destruction of Eagleridge Bluffs to make way for expansion of the Sea-to-Sky Highway for the 2010 Olympics.

She and other protesters stood in the path of bulldozers and refused to move. Nahanee opposed the construction on the basis that Eagleridge Bluffs was traditional land belonging to the Squamish nation and should not be used for development. Nahanee died of pneumonia and health complications.

Betty Krawczyk is a Louisiana-born environmentalist who settled in B.C. after refusing to pay income tax in the United States during the Vietnam War. The 78-year-old great-grandmother has been jailed three times for ignoring court orders against interfering with logging and highway developments.

Her most recent incarceration began on March 5, 2007. She was arrested for protesting the destruction of Eagleridge Bluffs along with Nahanee and several other protesters. Krawczyk fought her case without a lawyer and received a ten-month sentence.

She was recently released and has since announced her intention to run for mayor of Vancouver.

Krawczyk has published three books of memoirs, one of which documented her time spent in the Burnaby Correctional Centre for Women.

In a cramped room barely twenty feet from side to side, there’s a window overlooking a grimy alleyway, a few…

Derek Lappano has a decision to make about his unusual Vancouver home: Will he quietly leave town like the others,…

By Fram Dinshaw Is Kitsilano generally a safe part of town? Yes it is. Violent crimes such as murder, robbery,…