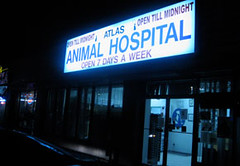 guage test as a licensing requirement for those vets who do not have English as a first language, and sets the passing score at 55 points.

June 2005 – A group of Indo-Canadian vets complain that the English test is too stringent, and that other provinces only require a score of 50. The real reason for the new English requirement, they allege, is resentment over competition from their low-cost clinics.

November 2005 – Fifteen Indo-Canadian vets including Dr. Hakam Bhullar of Atlas Animal Clinic file a lawsuit against 10 members of the BCVMA, and then president Dr. Robert Ashburner. They allege that Ashburner made slanderous comments against low-cost Indo-Canadian run clinics. The complainants have the comments on tape obtained through hidden-recording.

September 4, 2007 -19 Indo-Canadian vets, launch a human rights claim against the BCVMA and registrar Valerie Osborne alleging discrimination based on race.

December 3, 2007 – The complainants’ lawyer questioned former BCVMA president(2001-2003) Dr. John Cruickshank, suggesting that the BCVMA fought low-cost veterinary services by introducing an English test designed to stop new Indo-Canadian vets from opening practice. Cruickshank earlier said that he listened to a colleagues allegations of poor practicing standards at the clinics while on a fishing trip in 2002. He now says that the informal conversation took place in 2000, before he became vice president of the association later that year. Cruickshank also said that no action took place as a result of the conversation.

September 2008 – The last hearing in the case is scheduled for as late as September. It could be the longest case the B.C. Human Rights Tribunal has ever heard.

Kesar Singh Bhatti has something more than his administrative tasks at Khalsa Diwan Society of Vancouver to ponder these days….

By Ian Bickis Akbar Ganji is an Iranian journalist and one of the most outspoken critics of the regime. He…