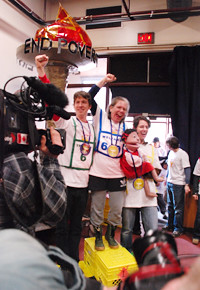 It has been almost a week since the Poverty Olympics took place at the Carnegie Centre and already the postpartum has set in. Normally, postpartum refers to depression after birth, but in this case it refers to forgetfulness.

The mock Olympics were a pantomime play of sorts, a cathartic happening with interactive events and crowd participation. A character, known as Mr. Bid, circulated the room praising the BC government’s commitment to a social housing legacy. Members of the audience hissed and booed as he spoke, venting at the fact that promises and homelessness increases seem to go hand in hand.

The event received a lot of press, but some of the coverage was bathed in the context of what the BC government is doing, as opposed to what it isn’t.

24 hours, which often lends a sympathetic ear to issues in the DTES, focused on the message that organizers were putting forward. A photo of Itchy and Scratchy, the official Poverty Olympics mascots and symbols of the DTES bed-bug infestation, was on the front cover. National networks, like CP, were not so sympathetic. I do not mean to pick on CP, but in their coverage the message of the organizers was split with official government 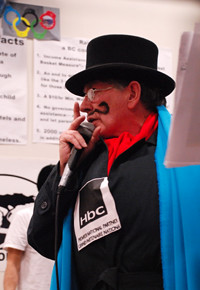 The 45 million dollar raise that Poverty Olympics speaker’s said VANOC officials gave themselves was silent in CP, while the six and a half million dollars the BC government recently announced towards social housing was highlighted.

While I am aware of the need to give fair space to either side of an issue, in some cases, like global warming, it is not appropriate to give minority naysayers a proportional say.

A day after the Poverty Olympics, Feb 4, a homeless man in the DTES burnt to death when his camping stove exploded, lighting him on fire in the doorway where he was seeking shelter.

A six and a half million dollar government promise, which falls far short of the amount needed to address homelessness, is not an equitable matter compared to a 45 million dollar bonus and a man burning to death in a doorway and should not be reported as so.

Sometime they’ll give a Cultural Olympiad and nobody will come

Valentine’s Day is the time to express and celebrate your affections for that special someone. It is a time of…

While searching Google news today, I came across an interesting report from Advertising Standards Canada (ASC). The report gave details…