More students of colour are pursuing journalism, but newsroom diversity is still lacking.

A senior Canadian journalist of colour says the only way to improve racial and ethnic representation in Canadian media is to put more pressure on editors.

“It’s not going to change until senior people in news organizations and in journalism schools care enough to actually do something,” said Denise Balkissoon, a columnist for The Globe and Mail whose parents are from Trinidad. Balkissoon is one of the many who have weighed in after a Vancouver journalist of South Asian descent recently quit his journalism job and went public with the difficulties of being a journalist of colour.

Balkissoon said her story ideas about race and ethnicity were often dismissed or misunderstood throughout her career and in journalism school at Carleton University, which she graduated from in 1999. She’s spoken out about this countless times without much effect.

“I feel like I’ve been quoted on this a lot and all the bosses at The Globe and elsewhere know what I think. So for me to say it again is not very useful,” Balkissoon said.

Balkissoon said there are no easy solutions for the problems of diversity, representation, and inclusion in Canadian media.

“It would be untrue for me to say that I know what the solution is other than constant pressure at the top,” said Balkissoon. “And that also should come from readers and communities, because leaving it up to the very small handful of racialized journalists is not fair and also not going to work.”

Balkissoon’s take is supported by marginalized journalists, who agree the changes that they want to see will require editors to be on board.

Wawmeesh Hamilton, a journalist who identifies as a member of the B.C. Hupacasath First Nation, echoed Duncan McCue, a prominent Indigenous journalist in Canada: “It boils down to whether senior producers and editors in mainstream media outlets give a sh*t,” he said.

On the topic of Indigenous representation, however, Hamilton had some practical advice. He argued that it’s not enough to focus on educating journalists and editors about Indigenous issues. Journalists also need to educate Indigenous leaders to improve their media literacy.

“You need to educate Indigenous leaders about what journalism is, who journalists are, why journalists do what they do,” he said. “Until that piece is taken care of … they don’t have to let you in the door.”

Where are the racialized journalists in Canadian media?

In the United States, “racial and ethnic minorities comprise almost 40 percent of the U.S. population … [but] make up less than 17 per cent of newsroom staff at print and online publications, and only 13 per cent of newspaper leadership,” according to research from the Columbia Journalism Review. The statistics are similar in Canada.

The challenges faced by minority journalists in a majority-white field was brought back into public debate by Sunny Dhillon’s essay last month, “Journalism While Brown and When to Walk Away.”

Dhillon, a Vancouver journalist of South Asian descent, has re-ignited an ongoing conversation about diversity in Canadian media. Many racialized journalists have reiterated his questions about what battles to fight, when to speak up, and when to leave.

Young journalists and journalism students have been a central part of this conversation, agreeing that change needs to come from editors.

“The gatekeepers need to be open-minded and interact with the journalist in the newsroom in a way that enables everyone in the newsroom to think collaboratively and to consider what perspectives are missing or are included, but problematically, and how everything can change,” said Anya Zoledziowski, a 24-year-old journalist of mixed race who is working as a freelancer.

Zoledziowski said that racialized journalists often feel that they’re only in the room to “be the diversity,” which can be an objectifying feeling.

“That puts a lot of responsibility on one person who should have the right to report on whatever issues they want to write on and not have to carry the fight against racism on their backs,” she said.

Young journalists stress that journalists and editors need to stay open-minded when it comes to issues of diversity and inclusion.

“I can’t give you a specific list or roadmap. I’m learning myself,” Zoledziowski said. “All I can say is journalists need to be engaging in this conversation and working together to make sure that we’re introspective about the journalism that we’re doing.”

Hamilton said the necessary changes to diversity and representation in Canadian media will require large systemic change. This change will take time but is worth waiting for and doing properly, he argued.

“It’s not about you. It’s about the long term,” said Hamilton. “The changes I hope to see, that I want to see with diversity and Indigenous issues in the news, in journalism, I’m not going to live to see it. But you know what? I saw the beginnings of it. That’s enough for me. 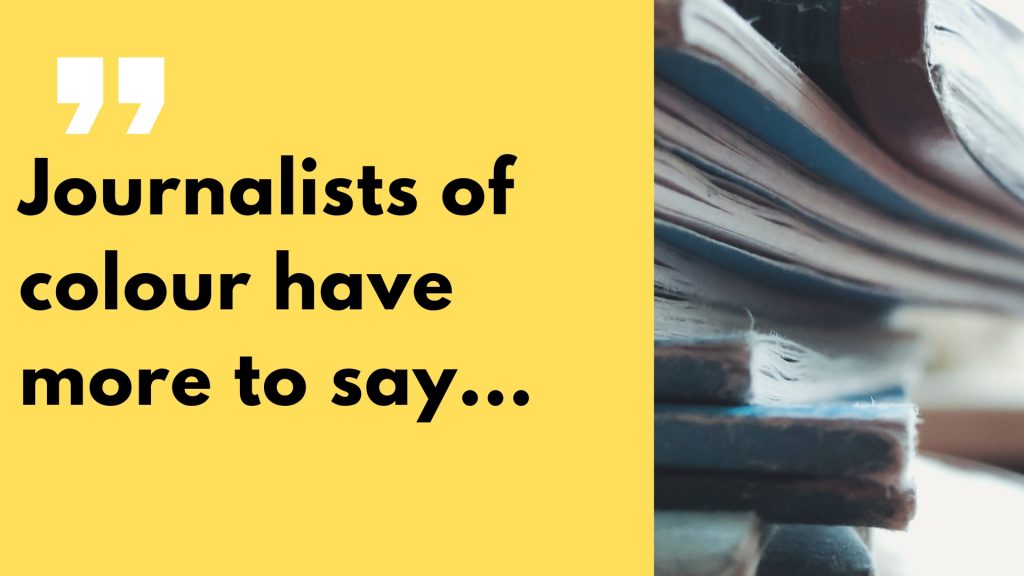 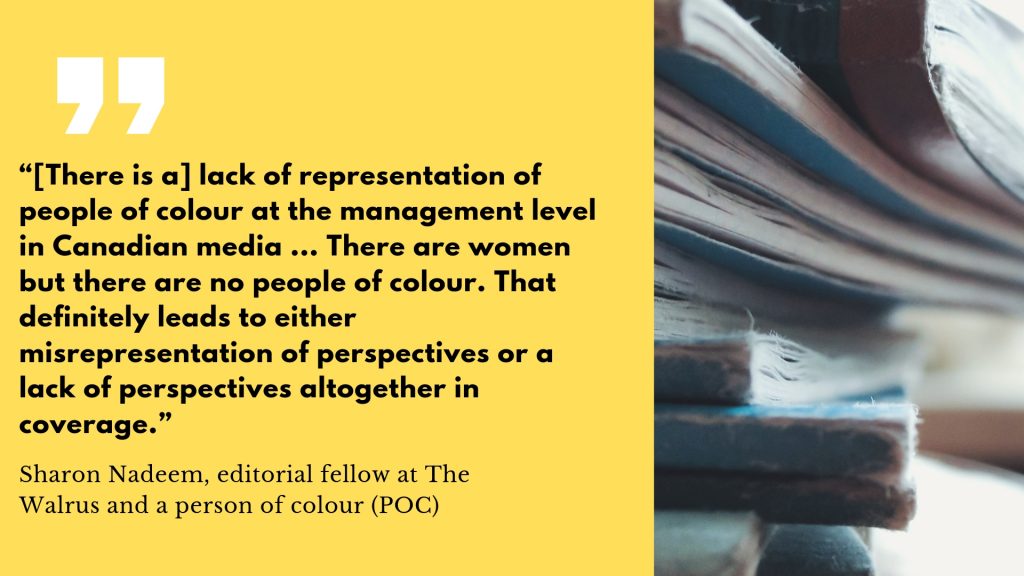 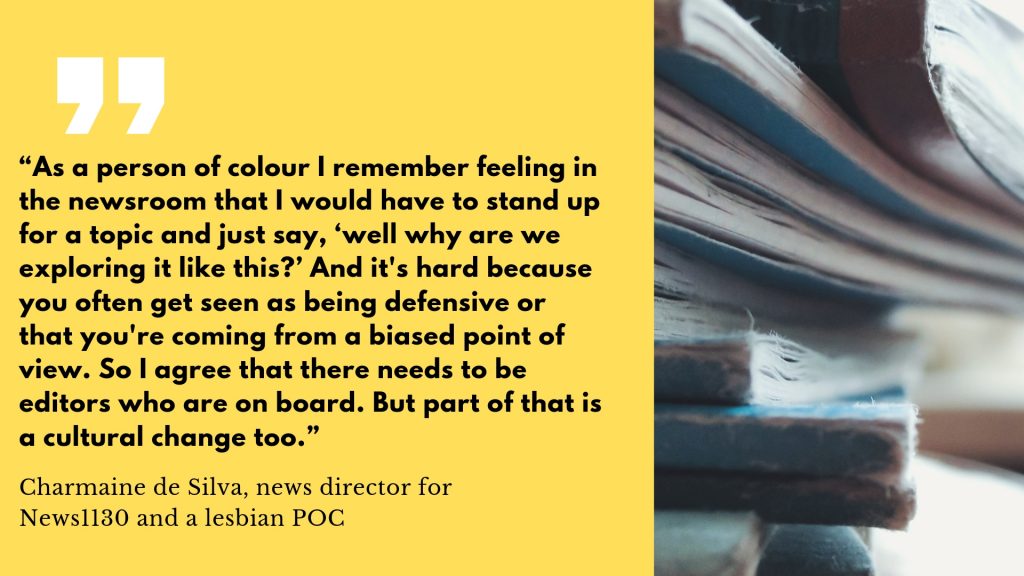 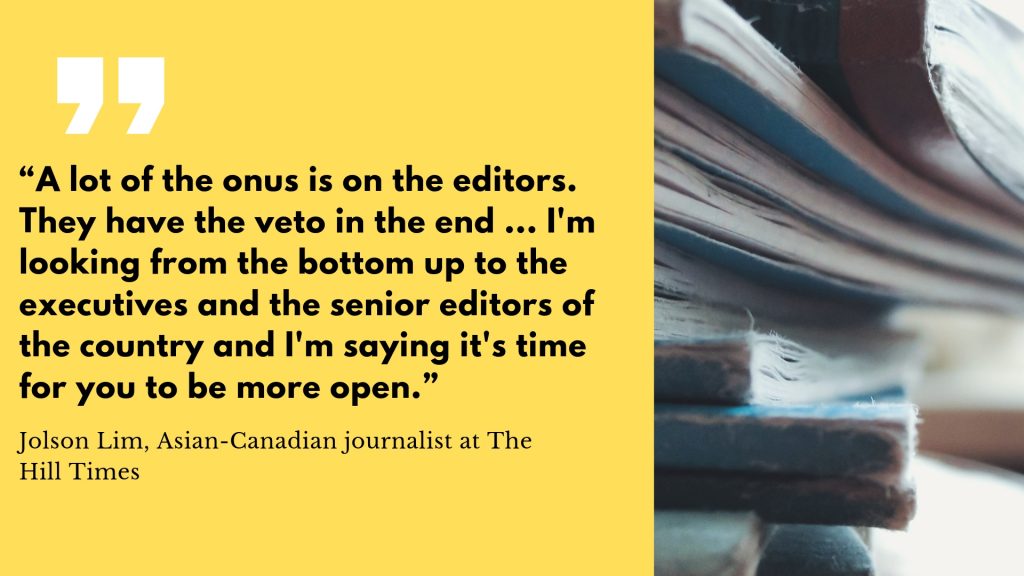 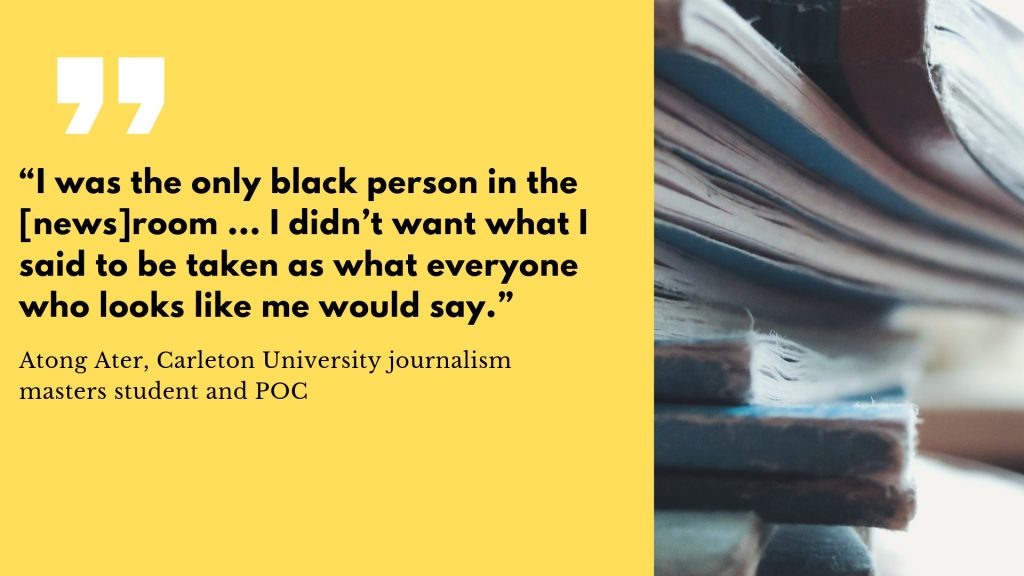 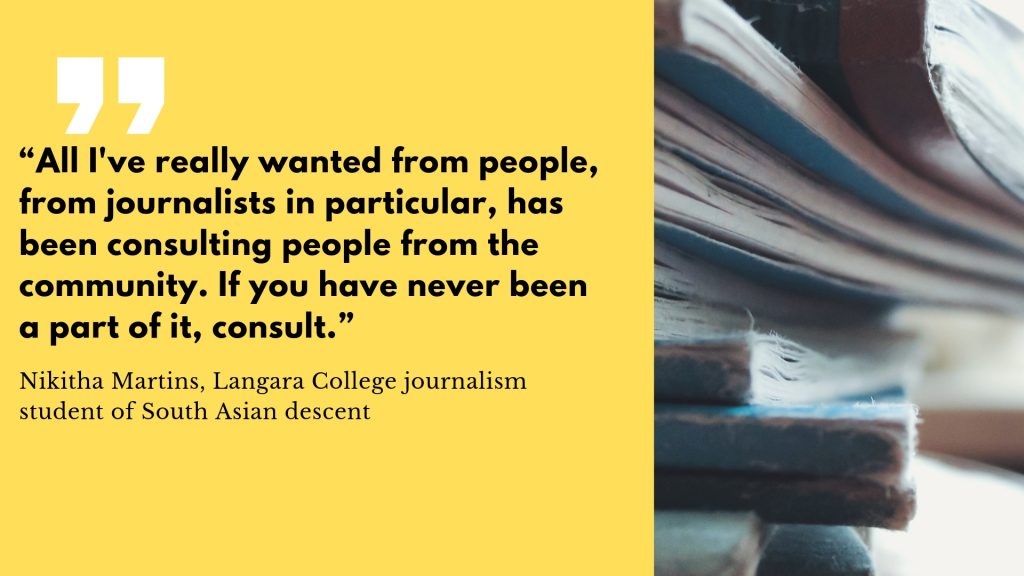 The Punjabi community in Vancouver

By Amanda Stutt Punjabis hail from Punjab region in Northern India, but the area is not comprised of an ethnically…

Sheree McKay is preparing chocolate at East Van Roasters. She is coping with mental illness and recovering from addiction. This…

UBC students with invisible disabilities: “It’s like having a whole extra course”

The University of British Columbia is taking steps to better accommodate students with disabilities, but what happens when a disability is not readily apparent?

Spawning salmon numbers are climbing in West Vancouver, thanks in part to the efforts of students working with the West Vancouver…

“Being a drag queen and a burlesque person is like being two people,” says Jamaal Parker