It’s a chilly Friday night in downtown Vancouver and people are scrambling for extra chairs in the crowded upstairs room at local non-profit ArtStarts in Schools.

Jessica Roberts-Farina, a freelance writer and editor, is one of the many gathered for a workshop called “Stating Your Worth.” The evening’s topics are rate negotiation, contracting, and effective pricing strategies. Other freelancers and “solopreneurs” of all stripes are in the room: web designers, content strategists, tech workers, photographers and small-business owners.

“I know how to set my rates for editing, but newer tasks or bigger more project-based stuff was still educated guesswork, so I … wanted to actually go to something dedicated to and put on by people who have had or who still have similar questions,” Roberts-Farina said.

The October event was the final in a three-part series of skill-sharing workshops for freelancers hosted by The Urban Worker Project, a national advocacy organization for independent workers, and Vancity credit union.

Roberts-Farina and the others gathered are part of the new world of work, a landscape where contract and freelance labour have become the norm. Organizations like The Urban Worker Project are part of a vital ecosystem that has arisen to meet their needs.

The challenges of an emerging workforce

According to reports by Statistics Canada, nearly 60 per cent of jobs created in 2015 were categorized as self-employment. B.C. currently leads the country in rates of self-employed workers, with over 438,000 people classified in that category in 2017 statistics — almost 20 per cent of the province’s labour force. 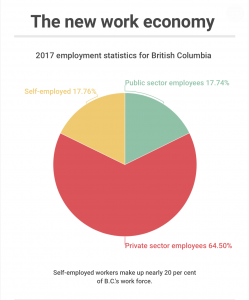 “Freelance work is often described as liberating, but it has a range of well-documented drawbacks,” says SFU labour studies professor Enda Brophy. “[These include] social isolation, inequities in the distribution of contracts, exclusion from union protections, the blurring of work and free time, and the amount of unpaid time spent searching for work or trying to secure payment.”

Co-working spaces have become popular across the country as a means for freelancers to work together and substitute the regular contact that is often lost outside of traditional work environments. A number of freelance unions have also emerged to meet the legal and practical demands of non-traditional employment.

What is often missing in the conversation, however, is the nuts and bolts of what it takes to strike out as an independent worker or to launch a freelance business. Skill-sharing events are becoming an efficient and effective way to fill this gap.

Born out of both their experiences as freelancers, as well as Cash’s work in parliament advocating for independent workers, the project aims to raise the issues of people in non-traditional employment.

Since its early days, part of the organization’s commitment has also been to building community and providing services for independent workers through hosting in-person skill-sharing events, first in Toronto, and more recently, in Vancouver.

“It’s a live event that brings independent workers together to talk about their specific issues –[that] doesn’t happen very often,” said Cash. “It’s a service that independent workers need: how to get your finances together, how to figure out all the potential tools that are out there to make your business run smoothly —there’s no course, really, for this stuff.”

The organization’s first Vancouver skill-share happened in the spring of 2016 at Creative Coworkers, a popular co-working space in the city’s Railtown district. Its second event was held this March at SFU.

The all-day meet-up featured a slew of workshops, panels and roundtable discussions focused on helping freelancers to equip themselves with the skills needed to build their businesses and to succeed as independent workers. Topics included filing self-employment taxes, financial management, writing contracts, invoicing, and strategies for getting paid on time.

The community- and solidarity-building potential is also a big factor for the organization.

Cash’s original intent was to make the issues of independent workers heard in the greater national policy debate about labour. Not only do the in-person events allow for different freelancers to connect across similar or related industries, in a way that many independent workers are often not able to, but they provide a venue for discussing many of the vital political issues that impact freelancers.

The project’s efforts have been welcomed by many.

One is Vanessa Bucceri, who launched her personal digital strategy and branding business in February of 2018, after 12 years of working in the corporate telecommunications industry.

“I didn’t really know a lot of people that work[ed] in this way, all my peers and social circle, everyone had a full-time job and worked as an employee. It was a really huge life change for me and it was really terrifying.”

Since attending project events, Bucceri has been able to incorporate information she gleaned into her business practices.

“Just to have that information, and someone to learn it from, was huge. It set my finances up and [taught] me how to handle the money side of freelancing from the get-go.”

“My hope is that these kinds of [events] empower independent workers to work towards getting paid what they’re worth. And I think — in terms of organizing — as more and more of us start to work this way, there will be a much greater consciousness around this kind of work.”

Ten days ago, Dan Waters dressed his dog up as a duck and posted a photo in an ad on Craigslist in hopes of attracting a new landlord in Kitsilano…

Recreational use of drones can harm animals, researcher says

Drones are wonderful tools for research when in the right hands, but Dr. Lance Barrett-Lennard thinks that this new flying…

Existing studios on campus are approximately 240 square feet, a Nano unit is 42 per cent smaller

A decrepit, unsafe dam and hydroelectric facility is in line to receive more than $800 million in upgrades, but the…