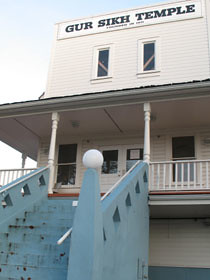 There has been renewed interest in the Gur Sikh temple, Abbotsford, following recognition as a National Historic Site of Canada.

The site was declared a National Historic Site of Canada in 2002.

It can’t house a lot of people for large social gatherings, but people still use it for smaller gatherings.

“My cousin had his engagement ceremony at the historic gurudwara,” said Sonia Brar, a second-generation Indo-Canadian who grew up in Abbotsford.

The present executive is making attempts to beautify the compound of the temple.

The compound has a fountain now and two life-size statues of Sikh riders in army uniforms.

“The statues were made in India and sent over to mark Queen Victoria’s silver jubilee celebrations in the 1880s,” said Baljinder Singh Bains, vice-president of the Khalsa Diwan Society that runs the temple. 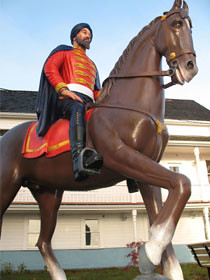 At that time, India was under the British colonial rule. The riders are dressed in British-Indian army uniforms.

The statues aren’t directly related to the temple history and were originally with the Ross Street Sikh Temple in Vancouver.

“We have plans for an office, which will house information on the history and legacy of the temple,” said Bains.

The temple executive is also working on building a website with historical details.

Well-told stories have educated children about the horrors of the Holocaust for over 50 years. Some of the most memorable…

By Laura Kane and Mohamed Algarf On a typical Saturday, French, Italian, Arabic and Mandarin echo through the classrooms at…

Art not ads for Vancouver billboard