Before the City of Vancouver legalized beekeeping, the city staff raised a number of concerns that needed to be addressed.

According to Food Policy coordinator Devorah Kahn, the biggest concern arose over a confusion between bees and wasps. She said some people were uneasy about beekeepers believing they were raising broods of wasps.

There are many different kinds of bees and wasps, but European honey bees and yellow jacket wasps are very common in Vancouver. These two share many similarities and while wasps have a much fiercer reputation, neither are very harmful to humans. 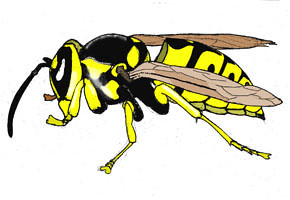 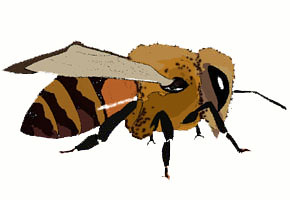 Yellow jackets and honey bees are both around 2cm in length with long cylindrical bodies. They are easily recognized by their striped abdomens and distinctive black and yellow or black and orange colour patterns.

Yellow jackets show a sharp contrast between bright yellow and black markings. Their exo-skeleton is smooth and shiny, giving them a metallic, almost robotic appearance.

Bees on the other hand are more furry looking, with a duller orange colour which gives a weaker contrast with the black.

Honey bees are vegetarian and forage exclusively among flowers. On the odd occasion they will investigate human food that has a high sugar content.

Adult yellow jackets are also vegetarian, but they hunt other insects and arthropods to feed their younger larvae. They are opportunistic foragers and are particularly attracted to sources of sugar such as fruit or soft drinks. This often leads them into conflict with people, especially during summer picnics, barbecues or during the fall when wasps are preparing to overwinter.

Both bees and wasps can deliver a painful sting, but unless you are allergic, neither sting is very dangerous. Yellow jackets, other wasps, bumblebees and even ants can sting repeatedly, but a honey bee can only sting once. A honey bee’s stinger has a barb on it that will catch and tear the stinger out of the bee once it has stung something. The bee will eventually die, but attached to the stinger is a venom sack that continues to pump venom into the sting.

It is important to realize that neither a honey bee or yellow jacket will sting without provocation. Wasp sting their prey, but since they are not interested in eating people, they only sting a human when they feel threatened.

That being said, you are much more likely to be stung by a wasp since they interact more with people and are more aggressive than honey bees.

By Anna Fong There are differences in the amount that dentists can charge patients. Lefebure was shocked when she received…

For seven years, skateboarders have been building their own skateboard park by hand in an otherwise unused tunnel under East…