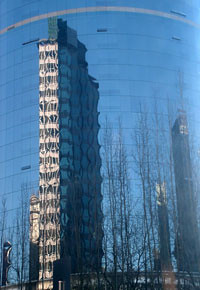 A developer has proposed two residential condominiums in place of the venerable Richard’s on Richard’s nightclub in the downtown, a move some say will further harm Vancouver’s architectural variety.

The Aquilini Investment Group proposes to demolish the club and move two heritage houses on Richards Street in order to build two towers – an eight- and an 18-story building in the condo-rich sector of southern downtown.

The proposed developments on Richards Street continue the trend of condo towers displacing remnants of Vancouver’s older architecture. Only 16 pre-war houses are left in the southern downtown, while 3,294 condo units were under construction in 2007.

With the demolition of Richard’s on Richards, Vancouver’s longest-running dance venue, the city will lose one of its last Cold War buildings.

“Take a look at great cities in Europe and North America. They all have a mix of really interesting older buildings and ideally new buildings,” said Andrew Yan, an urban planner at Bing Thom Architects. 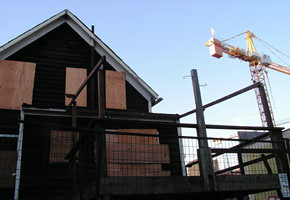 In an attempt to preserve architectural diversity, the city has operated a heritage building rehabilitation program since 2003. The program offers incentives such as tax relief to heritage building owners in exchange for the maintenance of buildings.

“The problem is that only the owner can register the building, and many owners are not at all interested in saving the heritage. They buy the premise for development purpose, not for its heritage value,” said Michelle Monforton, a previous tenant of 1080 Richards.

This building is one of the two heritage townhouses that the city is trying to save by moving it to the side of the 1000 block on Richards Street. If the 100-year-old buildings can be moved remains to be seen until the buildings have been peer-reviewed.

Monforton says she would have liked to register her now deserted home but could not.

Between 2003 and 2007, average construction costs and land values in the Lower Mainland increased by 40 per cent. The average price for an apartment in Yaletown was $591,875 in 2005, with an annual average increase of 19.7 per cent.

Luxton wants the city to implement more regulations on land costs, and on design and height of new buildings. “It’s because of the high development costs, that developers prefer to build those huge towers with condo units at the top end of the price scale.”

Apart from being lucrative to build, high-rise towers fulfill the city’s need for higher population “density”. Vancouver’s population is growing continually. It leapt 6.5 per cent between 2001 and 2006 and more accommodations are needed, especially in Vancouver’s downtown.

“I am not afraid of density at all, but I get concerned about how it is allocated,” said Luxton. While it currently looks like density und variety are mutually exclusive, he knows they can be combined. “People immediately translate density into towers and that’s a very aggressive form of architecture. There are alternatives, and many other cities know that.” 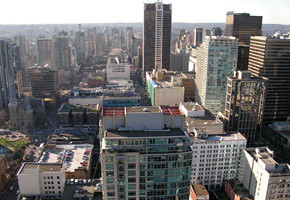 Solutions that make it possible to increase density while keeping a diverse, and lively townscape, are numerous, and get far too little attention, said Luxton. “The city likes to think we are so progressive, but actually nothing’s changed.”

To increase density in the city core while saving old, “less dense” buildings, many cities like Copenhagen, Stockholm, London, and New York have started to limit traffic coming into the downtown area. “I think we should start to think about this in Vancouver, too.”

Another possibility to keep the city architecturally interesting is to create more variety among the city’s new buildings. According to Luxton, there are many alternatives to the currently dominating point towers. “The European model of much higher density at a much lower height is actually more comfortable for people.”

One example of dense, but successful architecture without high-rises in Vancouver is an award winning mixed use project of 10 condo units on West 10th Avenue.

Besides the visible diversity among buildings, there is also the issue of variety in terms of usage, said Andrew Yan. “Building high end condominium towers prevents the use of buildings for other important needs of the city, like space for artists, businesses, public buildings, and parks.’’

For him there is a simple indicator of the value of condo towers to Vancouver’s citizens. “Will anybody fight in 50 or 100 years for to save the condo towers? I really, really doubt it.”

The eatART Lab in Vancouver looks like an auto body shop from a futuristic novel. Heavy toolboxes lie half-open on…

Well-told stories have educated children about the horrors of the Holocaust for over 50 years. Some of the most memorable…