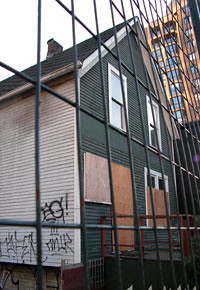 Built in 1907, the historic townhouse at 1080 Richards Street is an example of what can happen when heritage homes aren’t protected.

The house was threatened with demolition for years, until the City of Vancouver advocated saving this one by moving it a few doors up the street so that developers can build a condo building in its place.

At least three other houses from the same period were demolished in the 1000 block of Richards Street over the last decade.

An Edwardian-inspired “Gable-Front” house, it is one of the last remnants of a time when the downtown area was a quiet, tree-lined residential neighbourhood.

The home’s first owner was Joseph Clarke and his business partner Joseph Arthur Perry. As more white-collar jobs were created in the central business district in the early 20th century, young men with their families wanted to live close enough to walk to work or to take the streetcar.

The house’s most recent resident was Michelle Monforton, a filmmaker, who signed a lease in September 2002 and made the place a shelter for backpackers and people with one year work visas. The house was in such a bad state that it took her five months before she could finally move in. 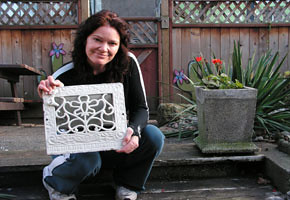 Monforton received a notice in December 2005 that the owner, Y.J.K Holdings Ltd., had sold 1080 Richards street along with five other premises on Richards, to Chandler Richards Street Ventures Ltd.

When Monforton obtained a letter from Chandler on September 7, 2006 announcing that her tenancy agreement will end in November the latest, she sought advice at the B.C. office of housing. She was told that the developer has no authority to make her move out before he obtains the necessary permits. So Michelle stayed.

She finally signed the contract, but before she moved out in February, she took everything old with her: the wooden banister, parts of the floor, the doors, the chimney, and the crates. Some of the parts decorate her new home now, others were given to friends and people interested in heritage objects.

It remains to be seen whether the house can be moved until it has been peer-reviewed. If the house will be refurbished, Monforton is willing to donate the pieces she removed to preserve the house’s heritage value.

From pretty packaging to unique products, the unregulated CBD industry on Instagram is enticing many.

Storytelling leaps from the page to Vancouver park

A new art project is bringing storytelling off the page and into the streets of one Vancouver neighbourhood. The Active…

Meet the Vancouver artist revealing the beauty of candid confessions

[fve]http://vimeo.com/86561405[/fve] The Confessions Project, an installation by Vancouver artist Jamie Smith, taps into people’s desire to share their secrets by…

Mozhdah Jamalzadah is finding ways to insert politics into the commercial world of Afghan pop. Jamalzadah writes lyrics with her…