Three main points to be aware of in dealing with survivors of political violence: 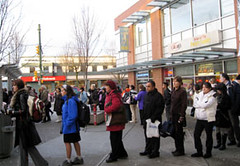 “They have a series of people in cells. Each of them have their arms out. There are holes in the doors, steel doors, so your arms are visible sticking out. And they have one guard who simply walks up and down the corridor. So you could have 300 people lined up in cells. And just have one guard who walks up and down. And he notes when someone’s hands slip in. Open the door, whack them around, pull them back onto their feet, and push their arms back out. They are forced to stand. Sooner or later their body gives out. And they collapse and they’re beaten and shocked and until they stand up again.”

According to Amnesty International, 102 countries in 2006 had cases of torture and ill-treatment perpetrated by state authorities.

By Cynthia Yoo. BC residents are feeling less safe and facing more discrimination, says the first study on racial profiling…