Akbar Ganji is an Iranian journalist and one of the most outspoken critics of the regime.

He is currently on a global 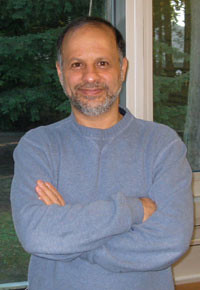 speaking tour, hoping to raise awareness of the deteriorating human rights situation in Iran, as well as to try and stop the current escalation towards the use of military force against the country.

He exemplifies the courage and strength of someone fighting for what they believe but his recent history also points to the lengths to which the Iranian government will go to try and silence its critics.

Ganji was imprisoned in 2001 for writing about a number of murders carried out by the regime. He endured solitary confinement and multiple hunger strikes in Evin prison before finally being released on March 18, 2006.

He has been told that if he ever returns to Iran he will be arrested again. But he brushed aside the threat.

“The danger of being imprisoned is just normal routine, nothing surprising.”

He went on to say, “I don’t really believe that there is any need for political refugee status from Iran.” This echoed his call for people to return to Iran and fight the battle at home.

Ganji said the regime is “very fearful of journalists. That’s why they closed down all the newspapers and arrested journalists. The role of journalists is to tell the truth, expose corruption and criticize government and dictatorships don’t like any of these.”

He is opposed to financial aid for dissidents in Iran because it can bias people against the west.

Instead, he wants Western governments to open up their borders to greater exchange in civil society and to reduce barriers for students to get study visas.

Tim Horton’s is an odd place for an anthropologist to find a job. But when Veronica Grigio arrived in Vancouver…