A study by a non-profit-society and UBC law experts investigated the problem of racial profiling for Arab and Muslim Canadians. Shahid Mahmood, an architect and editorial cartoonist says that he was an unfair target of racial profiling by Air Canada.

After three long years of struggle to find answers, Mahmood launched a complaint against Air Canada in the Canadian Human Rights Commission. The complaint stems from an incident in May, 2004 when Mahmood was barred from boarding a domestic flight from Vancouver to Victoria on Air Canada, while his Chilean-born wife was allowed to board.

“It shouldn’t have happened. I am a Canadian-born citizen and all that was necessary was a driver’s license. The Canadian government wasn’t at that point acknowledging that it had a no-fly-list. Meanwhile Air Canada as a corporate entity was doing business with the US and had to abide by certain security protocols and that probably meant abiding by US protocol on no-fly-lists.”

On his three-year long struggle

“I started asking for full explanation from Air Canada but none was forthcoming. They denied that it actually happened. Later they wrote that there was some security problem associated with my name. Whatever that means, I still don’t know.” 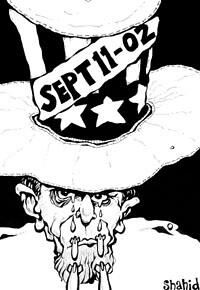 “Then I approached various politicians, Peggy Nash, Libby Davies. They all helped me push the political front, tapping into issues of racial profiling. Meanwhile I took this story to the media in order to raise public awareness.”

“It didn’t work, because Air Canada didn’t feel threatened that I would take legal action. Because they’re not mandated to do anything. It came to a point where I just couldn’t get any more answers, and it was imperative that I finalize this.”

“I retained Bakerlaw to negotiate with Air Canada. They were dismissive, so we took this complaint to the Canadian Human Rights Commission.”

On why he hasn’t stopped

“It’s an issue of principle. As an individual living in Canada of a minority background you hear of all sorts of stories, situations that people have faced in our post 9/11 world. By no means am I saying that security measures are unnecessary. But it’s also imperative that the powers that be realize that mistakes will be made.”

“It became a matter of principle for me to stand up to this because the average person who comes to this country as a naturalized citizen is scared of speaking up. They feel that their citizenship might be put at risk.”

“It becomes very insulting naturally when you go to an airport and you are treated as a second-tier Canadian. They predicted me to be more capable of carrying out a terrorist attack, based on my colour? Or is it the fact that I’m a political cartoonist? Because of my Muslim name? I don’t know.”

The for-sale sign in front of the house was the symbol Andy Chang had been waiting for. He and his…