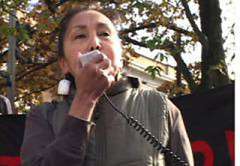 Becoming a grandmother hasn’t slowed down protester Kat Norris, an advocate for Aboriginal issues who helped to organize the Frank Paul Memorial Rally being held this Thursday.

Most people are surprised by her age when they first meet her in person, she said in an interview.

“People hear about Kat Norris, the protester, and they think I’m about twenty,” laughed the 52 year-old. “But, in fact, I just became a grandmother!”

Demonstrating has no expiry date

Norris has been passionate about Aboriginal issues since she was forcibly separated from her family as a girl and sent to a B.C. residential school where she said she endured mistreatment for three years.

She is currently an organizer with the Indigenous Action Group, a group of Aboriginal people seeking to draw attention to the racism and inequality still faced by indigenous people in Canada.

“We try to act as a voice for our people who have experienced injustice,” said Norris. “We see ourselves as being on community racism watch.”

Norris has also learned to use new tools such as the internet to make her voice heard. This media-savvy grandmother has her own blog through the group’s website, though she admits that she doesn’t always remember its address.

“I’m pretty up to date on technology but I still forget how to get my own page sometimes!” she laughed. 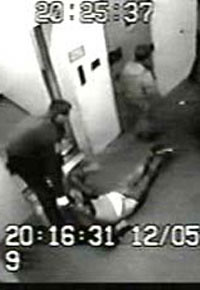 “Issues need to be acknowledged”

Norris said her goals for Thursday’s rally are to draw attention to the fact that First Nations people still face discrimination in Canada and to bring Frank Paul’s death to the attention of the general public.

Frank Paul was a Mi’kmaq man who died of hypothermia after being left in a wet alley by Vancouver police in 1998.

Paul had been severely intoxicated when he was picked up by police but was not taken to a detox centre. Norris said his death should be recognized as an example of how First Nations people are mistreated by the larger Canadian community.

“The world is still an unfair place to live in if you’re a First Nations person,” she said. “We’re still seen as uncivilized, lazy, dysfunctional members of society. That shouldn’t happen in this day and age.”

An inquiry into Paul’s death is currently being conducted by the Vancouver Police Department (VPD). The inquiry began on November 13, 2007 and is being headed by former B.C. Supreme Court Justice William Davies.

The Frank Paul rally caps off a week of demonstrations against the 2010 Olympics put on by the Native Youth Movement, a grassroots group of First Nations youth. They are protesting the large amount of public funds being spent on Olympics infrastructure and the lack of money being put towards social housing for the poor, many of whom are First Nations.

“We have nothing against the Olympics as an event but we do believe that the millions of dollars being spent on construction for this initiative could be spent on social services, such as affordable housing,” the group said in a statement issued online.

Susan Roy, a professor in UBC’s First Nations Studies program, said there is a divide within Vancouver’s First Nations community over whether or not to support the 2010 Olympics.

“It’s a contentious issue, for sure,” she said.

In 2004, the Four Host First Nations Society (FHFN) was established and offered its full support to VANOC, the organizing committee behind the Olympics. The group is made up of the Lil’wat, Squamish, Tsleil-Waututh and Musqueam nations. Its central purpose is to serve as a representative of native collaboration at official Olympic events and to coordinate Native business opportunities linked to 2010.

Norris said that she does not doubt the existence of these opportunities but she supports the Native Youth Movement in their protests. She personally believes that the cost of the Olympics is still too great.

“Of course, Aboriginal people have every right to use their entrepreneurial skills, to use the Olympics to their advantage, to benefit from it,” she said. “But at what cost? What is this costing our poor? I’m afraid that we’ll lose more than we gain.”

Related: Grannies speak out against 2010

Kevin wanted to vote in this year’s municipal election, but he wasn’t sure if he could meet the registration requirements

According to local artists, British Columbia is not on the same level as provinces like Ontario when it comes to funding for games.

A cyclist sailed down Hornby Street in downtown Vancouver on a recent afternoon, weaving in and out of idling cars…

Limelight Video owner Donald Newton hasn’t seen crowds like this in his video-rental store for a long time. Unfortunately for Donald, these browsers have no intention of returning his rentals.