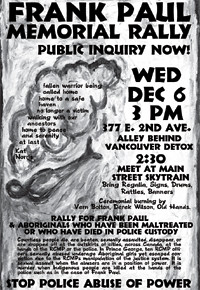 Names have power in Vancouver’s Downtown Eastside. One name in particular, Frank Paul, a chronic alcoholic with no fixed address, has a profound resonance. His name is invoked whenever the question of injustice is raised.

Frank Paul was found dead in a DTES alley on December 6, 1998. His clothes were soaking wet when police found him. He died of hypothermia.

Paul would have been just another name, swallowed up by the DTES, except for a police surveillance video from the station at 312 Main St. taken the night he died.

The video shows Paul crawling on all fours, unable to walk due to severe intoxication, being dragged in wet clothes out of the station. He was later placed in a police cruiser and dumped in a back alley.

After many long years of battle, a public inquiry into his death is finally underway. It has been an emotional week for all involved, including tears from the officer who left Paul in the street. 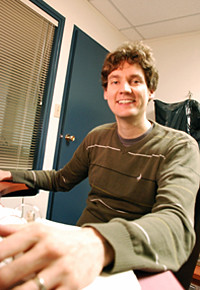 The inquiry has many dimensions and its impact could be far greater than could have been imagined from the anonymity of his death.

David Eby, lawyer for Pivot Legal Society, has been bringing interns from his law firm to view the proceedings. Pivot uses strategic legal action to change government policy. They have often been at odds with Vancouver police, and in a noted case, managed to illicit 50 apologies from the department for mistreatment of DTES residents.

In an unlikely case of bedfellows, Pivot and Vancouver Police Chief, Jim Chu, agree that the inquest will lead to better police policies in the DTES. The inquiry has become an olive branch of sorts.

In a neighborhood where pointing fingers is a community pastime, Frank Paul’s death may have unintended outcomes. If his death achieves one thing, the humanization of officers and victims, then Paul’s death will not have been in vain. It will be a good day in the DTES when victims and agents of social policy kill the message and not the messenger.

By Fram Dinshaw Since 1947, when India and Pakistan achieved independence from Britain, the death and destruction carried out in…

While searching Google news today, I came across an interesting report from Advertising Standards Canada (ASC). The report gave details…

Stéphane Dion is a fighter on Liberal TV, despite wanting Canadian troops to have a non-combat role in Afghanistan. Not…

A hero for a new generation

A new hero is joining the fight for justice in the Philippines. “Barbargsa – Blood of the Honorable” is the…